‘I’ve always loved fried chicken. But the racism surrounding it shamed me’

This fast food favourite has a complicated back story, and proud origins, going way beyond the colonel and his buckets 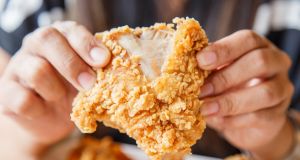 Fried chicken is a popular snack worldwide, but how much do we know about its history? Photograph: iStock

Growing up as a black kid in England’s white West Country, a car trip east to the busier, more exciting parts of the country meant one thing: KFC on the way back.

No matter how thrilling the purpose of our trip, the promise of salty, greasy chicken on our return would be the highlight of our day. My brother and I would get excited in the back seat just as the colonel’s bright face was due to make an appearance on the horizon. We knew what was coming.

“Shall we?” Dad would ask, as if it were a question and not an inevitability. Mum would nod, and soon enough I’d be savouring my two pieces of chicken – leg, if I was lucky. I can still smell the sharpness of the lemon hand wipe that would clean me up afterwards.

Fried chicken had been a regular feature in Dad’s childhood home in Darlington, Co Durham, where his family moved from Jamaica. Alongside curry goat and curry chicken, his mum would often make it, as would the other Jamaican aunties living nearby.

Where we lived in Weymouth, Dorset, you couldn’t get it. KFC wouldn’t make an appearance there until well after the millennium. So, like mango juice, hardo bread and sugar cane, we made the most of it on our trips to the city.

Back then, I’d promised myself that as soon as I was old enough, I’d eat fried chicken all the time. Only, by the time I made the move to London in 2000, with its countless chicken shops, I’d read about the inhumane conditions most birds destined for fast-food fryers were subjected to, so my trips to them were rare, often preceded by alcohol and always succeeded by guilt.

Already, I was noticing a pattern. The cheap chicken shops, fronted with happy cartoon chickens, were always concentrated in poorer areas, ones with a bigger black population. I’d muse that if only someone opened a shop serving southern fried chicken, but using free-range birds, they would make a killing.

And so it came to pass.

Shops serving “ethical” fried chicken started popping up all over the place, selling an experience marketed as superior to the neon-lit shops serving food in red-and-yellow cardboard boxes. They boasted about the happy lives their chickens enjoyed, and how they honoured them with 24-hour buttermilk baths and shiny, homemade glazes.

There was almost always a boneless option, too, presumably catering to an audience for whom the skeleton is an unwelcome reminder that what they were eating was once alive. That’s not to say the chicken was not good. Sometimes, it was. But there was always something so far removed from the dish’s origins. It lacked soul.

In the end, I, too, would make a living out of fried chicken, but not southern fried. It was karaage, the Japanese iteration, made with boneless (I know) and skinless chicken thighs marinated in soy sauce, mirin, ginger and garlic.

I became hooked after my Japanese sister-in-law made it for me. For months, I’d make it every weekend, and once I had run out of friends and family to feed it to, I started a supper club so strangers could pay me to make it.

The club was held in my home, with all the furniture pushed back against the wall to make space for collapsible tables, and the menu changed constantly, but karaage was a permanent fixture. And while I loved it, I still preferred regular fried chicken. So why didn’t I sell that instead?

Because I was ashamed.

Karaage sat comfortably because I perceived in it a refinement I overlooked in its deep south counterpart. It contained ingredients I could source only in specialist shops. And, ultimately, it was Japanese, from the same nation of sushi and sashimi, of culinary refinement and gastronomic precision.

Back then, I was not even conscious of the racist baggage fried chicken came with in the US. But it was seeping into my subconscious, and I felt it.

As with most things, what happens in the US winds its way over to the UK. Including, it turns out, racist tropes. In my day job as a writer on a national newspaper – my supper clubs then were still a hobby – I sat next to someone who would often crack the same joke when I stood up to go for lunch. “What you getting?” he’d grin. “Fried chicken?”

It infuriated me, but I could never articulate why. My colleague’s was a specific type of racism, a sort perpetuated by liberals so believing in their supposed lack of prejudice they think they can make racist jokes ironically. It wasn’t the first time someone used a racist slur against me that went over my head, like the time someone called me a golliwog and I laughed along with them, too young to understand the inference. But with fried chicken it runs deeper.

Historically, chickens held special importance for enslaved black Americans, being the only livestock they were allowed to keep. Black domestic workers would cook fried chicken for their masters and, later, their employers. And then, after emancipation, women known as “waiter carriers” would hawk trays of fried chicken and biscuits to travellers through open windows as their trains stopped in stations.

But while these black cooks and homemakers effectively invented what would become known as southern food, their contribution was erased. The white folk took the credit for its creation, while black people were mocked and parodied merely as greedy consumers. It’s one of the most outrageous examples of cultural theft.

The racist 1915 film The Birth of a Nation, widely touted as the first blockbuster, attempted to paint black people as aggressive, disorganised and untrustworthy. In one scene, elected black officials are seen swigging from whisky bottles and putting their bare feet on tables. And then one man is seen animalistically gnawing on a chicken drumstick. In that one clip, the negative association was cemented.

Later, advertising posters were printed featuring caricatures of black people with big lips and grinning smiles eating fried chicken. One mini chain even went so far as to have such a character as its logo. Its name? Coon Chicken Inn. It remained open until the 1950s.

All this explained my discomfort in publicly asserting my affection for fried chicken. But it did not diminish it. I understood why some African American friends of Momofuku restaurateur David Chang refused to be seen eating fried chicken on camera, as he described in an episode dedicated to the southern delicacy on his Netflix series Ugly Delicious. They didn’t want to be perceived as a cliche.

But while the US was trying to unpick the racist issues surrounding fried chicken, the UK’s Conservative government was stoking the flames. The Home Office’s decision to put anti-knife crime messages on fried chicken boxes perpetuated yet more racist stereotypes about knife crime and chicken shop customers.

It all feeds into that same shame. During a recent podcast recording, I was asked what my final supper would be. As I said “fried chicken”, I couldn’t help hearing an imagined, knowing, “Of course!” in response.

The US comedian Dave Chappelle got it. In one sketch, he mimics white people watching him as he eats some chicken. “Look at him,” they say in amazement, “he loves it just like it said in the encyclopedia.”

But enough is enough. The time has come to start undoing the negative associations and start giving fried chicken its dues. I look to the US chef Edna Lewis for inspiration. In her seminal 1976 cookbook, The Taste of Country Cooking, Lewis, who died in 2006, spoke affectionately of the fried chicken of her childhood. She grew up in Freetown, Virginia, a town founded by freed slaves who included her grandfather.

“In Freetown,” she wrote, “fried chicken was a very special dish. Frying chickens were produced only once a year in late spring through to early summer.”

Imagine, fried chicken so special it was a seasonal dish. I should be proud that this food of my heritage has taken over the world. Yes, its most famous purveyor may be a white, bespectacled moustachioed colonel, but fried chicken is firmly rooted in black innovation and creativity. It should be a source of pride for the African diaspora. That we’ve been bullied and made to feel ashamed of it is one of the biggest outrages in culinary history.

So now, it’s time to admit it. Fried chicken: I love you. And I don’t care who knows. - Guardian.

What is the best way to cure creaking floorboards?
Real news has value SUBSCRIBE