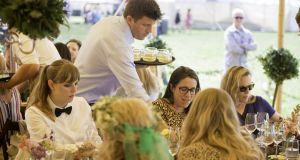 A bespoke menu at Electric Picnic, created by chefs Derry Clarke and Mark Moriarty, will offer a charity-fundraising fine-dining experience as part of this year’s festival lineup.

Last year’s dining was in demand at the three-day festival in Stradbally Estate, serving over 300 fine diners over two days of the Picnic, which runs from August 30th to September 1st.

The range of food at Electric Picnic is generally well regarded, but the €120 five-course menu with silver service (and including vegetarian options) brings it up a notch, promising gourmet dining experience in a festival setting, using produce from the supermarket’s premium range.

Veg: orzo with chilli and fennel.

At his l’Ecrivain restaurant on Dublin’s Baggot Street for this morning’s launch, announcing the menu, chef Derry Clarke said of the charity dining event: “It means a lot for me to do it. Pieta House is very close to my heart.” Last year the event raised €31,000 – “ a nice bit of money from two days” – shared between the charities, and this year they’re emulating that. To suggestions that €120 was steep on top of the festival ticket, Clarke said if they were doing it commercially, “we would have to charge more for it, to cover expenses, with roughly 100 people per sitting. It’s well sponsored.”

Last year’s banquet was “a huge success , and I thoroughly enjoyed putting together the menu and meeting picnickers over the three days,” said Clarke. “The Tiny Quartet played, and different artists joined them, and there was a great party atmosphere. And it looked spectacular. It’s an oasis at the festival.”

He and Mark Moriarty are using Tesco Finest (Moriarty is a “brand ambassador”) products for the meal. “I’m thrilled to be joining forces with Derry,” said Moriarty. “Together we’re presenting a menu of food that is classically Irish based, simple and confident, presented in a new way. I’m really looking forward to sharing the experience with guests, with live music setting the ambiance and knowing they are supporting these great charities, Temple St and Pieta House.”

Moriarty’s sister works at Temple St, and both their parents worked in mental health, so the charity beneficiaries were important to him, he said. Coming up with the menus for “100 people in the middle of Laois was great, taking the Tesco Finest products and doing it differently”. He mentioned the smoked salmon cigars, served in a box, and the olive oil from Tuscany, on the salted lemon tart – “we’re pushing the boats out with the ingredients”.

The banquet went down well at last year’s Electric Picnic, with more than 300 diners across two days. Tickets are limited, with four sittings over the weekend, on Saturday and Sunday at 1pm and 5.30pm (sittings are about two hours long). The organisers describe the dress code for the picnic banquet as “Black Tie come Festival Fabulous”, and if diners don’t have their Sunday best with them, they promise a selection of tophats and headpieces to dress up festival gear.

Tesco has partnered Temple Street since 2014, and aims to raise €5million in five years for the children’s hospital. Pieta House works in preventing suicide and self harm.

Tickets to the Fine Dining Picnic are priced at €120 and are now available. Click here to book via giv2go.com

Jennifer Rock, The Skin Nerd: ‘I was motivated by people’s perceptions of me as a teenage mother’
10