Ditch the takeaway in favour of this healthy aloo gobi

Fresh herbs and spices transforms the humble potato and cauliflower 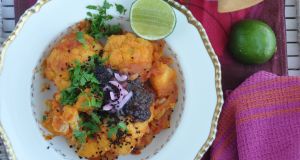 Whenever I have plenty of vegetables that need cooking, I look to Indian recipes for inspiration. Indian cuisine has a fantastic array of vegetarian dishes due to religious and cultural influences. Shaped by Hindu and Jain beliefs, vegetarianism in particular is widespread in Indian culture.

Using fresh herbs and spices transforms simple vegetables such as the humble potato or cauliflower. This week’s recipe is just such a dish.

Aloo gobi is named after its main ingredients: the aloo (potatoes) should be just done enough but not mashed, and the gobi (cauliflower) should be tender but retain some bite. Go the extra mile and add some peas for sweetness and great texture. The dish is then called aloo gobi mutter.

The distinctive yellow colour in the dish comes from the turmeric. Mostly used in cooking for its ability to add colour, turmeric also has a distinctive earthy taste that is both bitter and peppery, with a mustardy smell. It’s always worth using a small amount first then tasting the dish before adding more. Used for thousands of years in India, it also plays a major part in Ayurvedic medicine, apparently having antifungal and antibacterial properties.

Although generally seen as a simple side dish for chicken, beef or curries, I love to serve aloo gobi as a main course. It’s a fragrant, filling dish bursting with vegetables and warming spices. It is as visually beautiful as it is tasty, with golden yellow florets of spiced cauliflower.

This is usually a dry curry dish, but I sometimes add a little water to steam the vegetables and avoid them burning. It really elevates this simple recipe, and served with warm naan breads and a dollop of chutney it has become a favourite midweek recipe of mine and a great healthy way to eat more vegetables.

I sometimes make this more of a wet curry by adding a tin of coconut milk. Feel free to add even more to this dish, such as a teaspoon of nigella seeds, a few handfuls of baby spinach leaves, or a scattering of toasted flaked almonds. The more you make it, the more potential additions you’ll think of.

1. Place the oil in a large heavy-based pan over a medium heat. Add the onions and saute until soft, approximately five minutes.

3. Next, add the coriander, cumin and cayenne pepper and mix for a few seconds. Add potatoes and cook covered for two minutes. Then add turmeric and cauliflower and the tinned tomatoes, mix and bring to a simmer.

4. Cover and cook the potatoes and cauliflower on low heat for 10-15 minutes, until they are just about getting tender. Stir every five minutes or so and make sure the vegetables are not sticking to the base of the pan.You may need to add a splash of water. Season with salt and add a tablespoon of butter for richness.  Mix gently.

5. Cover and cook on low for another five minutes or so until the vegetables are tender to your preference. Scatter freshly chopped coriander over the top and serve.

Thinking of take-out tonight? Here's the pick of Dublin's restaurant meals to go
2