For some passengers, the airport’s 40 food outlets are too expensive and limited 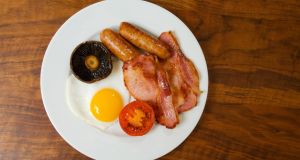 The traditional full Irish fry-up. That’s the single biggest-selling food offering in Dublin Airport over the last year. It’s followed by five million cups of tea and coffee. The most tweeted image from the airport for the same period was of a pint of Guinness – all 775,000 pints of them.

In fact, judging from my observations while transiting through the airport over the last several months, I can anecdotally report that at least some of the full Irish breakfasts were consumed alongside a pint of the black stuff. I can also report that outgoing airline passengers in general seem remarkably fond of downing pints before 10am.

Kate Flood is head of commercial concession at Dublin Airport. Together with a team of colleagues, she has responsibility for the food and beverage offerings at the airport, both landside and airside; airside being the area beyond security, for departing passengers.

Refreshingly, she doesn’t start our conversation with unrealistic declarations about how the food at Dublin Airport is tip-top, fabulous, best in class.

“It could be better,” she says. “The airport itself is world class, but our food offering is probably where we fall down. We probably aren’t there yet; representing the best of food in Ireland at the airport.”

More than 1,100 people work in food outlets at the airport. To Flood, these employees are not just representing their particular cafe, restaurant or bar; they are ambassadors for the country to passengers. “These people are usually the first or last you see when arriving or departing,” she says. “They are part of the experience.”

There are 40 outlets that offer food and beverages at Dublin Airport; 10 on the public landside, and the rest airside. It’s fair to say that pretty much all passengers who go through the airport, whether for business or pleasure, have opinions on the food. The price, the variety, and the quality of food and drink offerings in an airport are scrutinised more closely by the transiting paying public, because you’re essentially trapped.

It’s a privileged trap, waiting to board an aircraft, but the fact is, choice of what to eat and drink is limited exclusively to what’s on offer once you pass through security.

Flood explains that the concept of food products need to be easy to grasp, as for example, a portion of chicken that comes with three salads. But which three salads are in the deal? The customer needs to be able to understand what’s on offer, and how much it costs, as passengers are usually under time pressure.

I went airside one busy recent morning to talk to some departing passengers. A group of men were drinking in the outdoor garden terrace. “We’re going on a stag to Birmingham, so we’re not eating – we’re drinking,” one of the 15 in the party says, raising his pint of Guinness.

“Food at the airport is typical airport food: rubbery and expensive,” another declares, who was on his second pint, and ordering a third.

Paul and Ann Hassett are in Marquette, waiting for a flight to Crete, to celebrate a 50th wedding anniversary. “A second honeymoon,” Paul jokes. They have ordered tea, a sandwich for Paul and a scone for Ann. “Food is marginally more expensive at the airport,” Paul says. “But when you’re going on holiday, a couple of euro extra is nothing.”

Fergus and Sandra Collins are ensconced in Butler’s Chocolate Cafe. They’ve had coffees, a sandwich and a croissant. They’re on their way to Scotland to watch a golf competition. Butler’s is their regular airport stop.

“I don’t think it’s any more expensive here than in Butler’s at home,” Fergus says.

More than 31.5 million people went through Dublin last year; a sum that includes outgoing and incoming passengers. Most of the people who avail of the airport’s food outlets are travelling outwards.

All of the spaces selling food and drink are tendered for. “In the past, we tendered units in an ad hoc way, but in the last 18 months, we have really identified an opportunity with food at the airport,” Flood says. “We made a decision last year that we were going to tender all of the units at the airport. We asked for a mix. There needs to be some international brands that international passengers will recognise, but we also want to bring in a range of local products. It’s about providing a range of offerings.

“There always needs to be an offer for people travelling on a budget. The offering needs to be fast and convenient without compromising on quality.”

The tendering process is “ongoing, with the airport tendering for the two separate contracts throughout the airport, for 10-year contracts.” The successful candidates will be announced early next year. There will be an additional round of tendering the following year.

As I wander through the airport, I note the price of a regular Americano coffee at various outlets. I couldn’t see any that exceeded €3.

It’s when you start looking at things like wraps and sandwiches that prices seem steep for what are very basic food offerings. At Marquette, it was €6.25 apiece for an egg and cress sandwich; a tuna and rocket sandwich; and a cheese ploughman’s.

“Airport prices in general are too high, and there is so little variety,” says Shelley Toomey, who is in transit to Paris from Los Angeles. “It’s all high-carb offerings, like bread, pizza and pasta. Airport food is often over-processed, and that’s what I’m seeing here in Dublin. And there are only so many salads I can eat. For the standard of what you get, it is far too expensive.”

Rosaleen O’Leary is having coffee and a croissant at Soma, a burger outlet, before she boards her flight to London. Why did she choose this particular place to stop and sit down? “Only because our departure gate is close by,” she says, and laughs as she realises the place has a meat-heavy menu. “I’m actually vegetarian.”

Enduring mystery of those missing magical cars continues to baffle
7