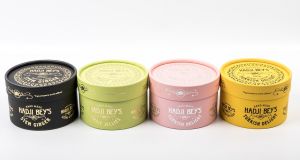 The makers of Hadji Bey’s Turkish Delight, first manufactured in Cork in 1902, have added two new products to the confectionery range: crystallised stem ginger and fruit jellies. The ginger sweets, made with only two ingredients, ginger and cane sugar, are an old recipe that has been revived and the fruit jellies are made with pectin rather than gelatin, which gives them a soft, less chewy texture.

Leo Cummins of Hazelbrook Confectionery in Newbridge, Co Kildare, which now makes the range, says the crystallised ginger sweets are often referred to in consumer correspondence in the Hadji Bey archive, and that the letters came from “all parts of the world”.

The pectin fruit jellies come in lemon, mandarin, strawberry, blackberry and pear flavours and are made with vegetable extracts rather than artificial colourings. Both come in the same pretty, gold-embossed round boxes as the lemon-and-rose-flavoured Turkish Delight, and cost €8.95.

Samhain, 5,000 years of Irish Food, is a Boyne Valley Flavours and Hinterland Kells festival taking place this weekend in the Co Meath town. Among the many food-related events is one that celebrates National Black Pudding Day (November 3rd). You can join Darina Allen and butcher Hugh Maguire for a black pudding masterclass in the Headfort Arms, starting at 2pm. Tickets are €10 and can be booked online at hinterland.ie.

TheBurren Smokehouse in Lisdoonvarna, Co Clare has launched a visitor attraction called Taste the Atlantic – The Irish Salmon Visitor Experience. The self-guided, interactive tour explains the importance of salmon in Irish mythology and history, and combines traditional artifacts and multimedia.

It is the latest addition to the Seafood Trail, a Bord Iascaigh Mhara and Fáilte Ireland initiative which features 24 seafood and aquaculture producers along the Wild Atlantic Way.

Burren Smokehouse was established 30 years ago by Birgitta Hedin-Curtin, who says the new attraction will provide “an opportunity to educate and talk about sustainable aquaculture in Ireland”.

The smokehouse also features in Burren Dinners, a collection of recipes from chefs and artisan food producers in the area, compiled and edited by Trevis Gleason. Hedin-Curtin, who is originally from Sweden, shares her recipes for oyster and smoked salmon rumaki, grilled lobsters with lemon mayonnaise, and apple crumble. Burren Dinners is published by O’Brien Press, €24.99.

Game on in Westport

Seamus Commons, head chef at Knockranny House Hotel in Westport, Co Mayo, has a favourite time of year in his kitchen, and it is wild game season. A keen shot, he takes an active part in sourcing rabbit, hare, wild duck, venison, teal, mallard, partridge and pheasant for the hotel’s annual It’s a Wild Game celebration, which takes place on November 22nd-23rd.

A weekend package, which includes two nights’ bed and breakfast, game stew in the Brehon bar on Friday evening and a five-course game tasting menu with wine pairings at La Fougère restaurant on Saturday, costs from €229 per person sharing.

Restaurant review: A culinary treat in the west of Ireland
6