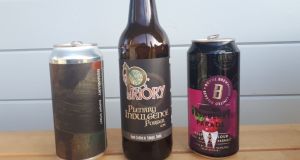 Spring beers to try: a stout, porter and raspberry sour

There’s been plenty of new beers hitting the shelves and taps as we edge closer to Paddy’s Day – which may morph into a month-long celebration in the years ahead, if ambitious festival planners have their way. For the moment, it’s officially a five-day event – which seems long enough already, if you ask me – taking place on March 14th-18th.

The annual Alltech Craft Brews and Food Fair, usually held in February in Dublin’s Conference Centre, has moved to coincide with the St Patrick’s festival this year, most likely to capture the attention of the many visiting tourists.

The three-day event will have loads of great Irish breweries, including Rascals, the Porterhouse, Kinnegar and some from overseas, such as the Wild Beer Company, the Barcelona Beer Company, and more. There’s also a Distillers’ Quarter, cider and plenty of grub. Tickets are €15-€27. (see alltechbrews.ie)

Priory Brewery, a social enterprise in Tallaght with all profits being reinvested in local jobs, will also be among the exhibitors at the Alltech festival. They’ve just released their Plenary Indulgence Porter, which comes in a 500ml bottle. It’s tasty, light-bodied at 4.3 per cent with a touch of cocoa, coffee and a balanced finishing bitterness.

Boundary is a co-op brewery based in Belfast which was recently picked up by ABCD distributors in the Republic, so you can expect to see more of their beers here (with labels designed by artist John Robinson). Their 7 per cent Export Stout is similar in flavour profile to the Priory porter, but dialled up for a richer, maltier body and some dark fruit flavours, chocolate and a solid bitterness.

For something completely different, Boyne Brewhouse in Meath has just released their Raspberry Parade Sour at 5.5 per cent. This has a gorgeous aroma of raspberries with a cleansing, but not too intense, sourness. It’s crisp, refreshing and overall it’s very drinkable – like a little early burst of summertime juiciness.