Why I Love … Golf 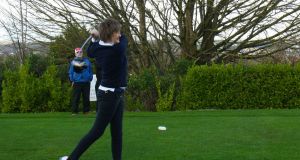 A game of golf tests one’s humility, patience and tolerance.

For my 40th birthday, my mother, Nuala (herself an avid golfer), gave me a gift of an annual subscription for Lahinch Golf Club. Nothing unusual about that – except for the fact that I was not a golfer! Six months later, she had passed away, I had given up my busy nursing career in Dublin, had married a wonderful man, and found myself living in Mallow, Co Cork. As part of my new life there, I joined Mallow and Doneraile golf clubs, and it was then that I fell in love with the sport.

Initially, I found playing therapeutic – it offered me a real healing and recovery process following all those life-changing events. I could spend three to four hours at a time in glorious surroundings. In those moments, any sadness, worries or fragility were forgotten and my mind rested, calmed somewhat, renewed.

Golf can be played at all levels of competency due to the handicap system, and it can be played by all age groups. During a round of golf, one’s mind is in the moment, consumed with trying to swing, hit and put a little white ball into a not-so-big round hole! It takes immense concentration. It tests one’s humility, patience and tolerance.

Being a competitive person, I am constantly challenging myself, and golf allows me to do that. I enjoy every game of golf I play. The golf is not always good, but there is always one brilliant shot that will bring me out again. However, the most rewarding aspect of golf for me is the many people I have met and the special friends I have made over the past 22 years. There have been so many highlights and memories made. I am proud to be associated with Mallow Golf Club and with such a wonderful group of people.