Beer from the underworld: a little sip of ancient Ireland 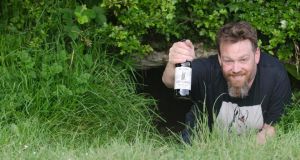 “I’m a bit claustrophobic, so I was certainly out of my comfort zone.” Black Donkey brewer Richard Siberry

Near the village of Tulsk, Co Roscommon, there’s a small cave that was once known as the “gateway to the underworld”. It was here, they say, that Queen Medb of Connacht was born, and where young boys, back in the day, were sent for a night as a kind of cruel rite of passage. It’s also where a new beer from Black Donkey brewery has its curious beginnings.

“You have to slide in on your back to get into the cave,” says brewer Richard Siberry, who was behind a project to harvest a native Irish yeast strain from the ancient Oweynagat site. “I’m a bit claustrophobic, so I was certainly out of my comfort zone. But it was all in the name of good beer.”

The Black Donkey team, helped by Rathcroghan Visitor Centre, left wort swabs in the walls and vegetation of the cave, returning later to collect the samples. “That’s where the lab came in,” says Siberry, explaining how wild yeasts can easily contaminate breweries so need to be carefully managed. The Wild Yeast Chase, as the project became known, was funded by an innovation grant from Enterprise Ireland in conjunction with Micra Biodiagnostics and Tallaght IT, where microbiologists grew the yeast strains harvested from the cave, isolating suitable ones for brewing.

Morrigan Strain 1 was the yeast eventually propagated for use by Black Donkey and named after the legendary warrior goddess who once inhabited the Oweynagat cave. It was harvested from a blackberry bush just above the cave’s tiny entrance.

Making the beer was all about “letting the yeast shine” in the taste, says Siberry. Underworld Savage Ale is available in kegs and bottles later this month (June) and is a light-bodied, dry and citrussy farmhouse ale with plenty of funky, earthy flavours from their adventures into the unknown.