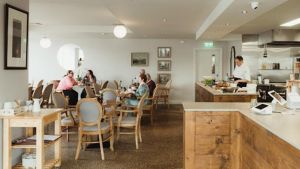 There’s food history in this town. On a freezing Friday morning in January 1947 Hannie Leahy and Olivia Hughes led a group of women setting up the first country market in the old town hall. It was an iron-cold winter that still had months of cold left in it. A chicken run was repurposed to display cakes and bread, and a local carpenter fashioned a Victorian workbox into a money box for the takings. They sold out in 90 minutes and took £9 in total.

Hannie Leahy’s eldest daughter, Alice, grew up at the centre of a web of country markets that spread out from that first one, in Fethard in Co Tipperary. Country markets gave women on farms their own income, at a time when the creamery cheque went to the man of the house. That spirit of social enterprise was one of the inspirations that led Alice to set up Trust, an organisation helping homeless people in Dublin, in 1975. The Alice Leahy Trust, as it is now known, continues its work today. We visited Fethard when we were working together on Alice’s memoir, which will be published in October.

Gleeson isn’t doing an Ottolenghi tribute act drizzled in pomegranate molasses. He is, though, cooking with the same precise attention to flavour

Tonight I’m back on an early summer’s evening. Dooks of Fethard has a Dukes of Hazzard ring to it, but no one has jumped into a car through its window to get here. Instead we’ve driven calmly down beautiful country roads full of new greenness under a clear blue sky.

Dooks Fine Foods is the homecoming project of Richard Gleeson, who trained as a chef at Ballymaloe and worked in London with Skye Gyngell’s Petersham Nurseries Cafe and at Yotam Ottolenghi’s Islington restaurant. I’m a card-carrying Yotamite who always packs an Ottolenghi cookbook or two in the holiday suitcase. And, yes, that’s probably one of the most middle-class sentences you’ll read today. But it all means I’m expecting good things.

Dooks is a bright, modern building set on a corner opposite Fethard’s ballroom, which wears a fresh coat of white paint. Inside Dooks the floor is polished concrete, the tables beautiful timber and the chairs comfortable armed French-style ones. We’re here for the Saturday-night tasting menu.

That’s when this little restaurant gets revolutionary. Gleeson isn’t doing an Ottolenghi tribute act drizzled in pomegranate molasses; he is, though, cooking with the same precise attention to flavour, adding the perfect thing to take it all up to 11.

It’s there in the first plate, a small portion of brill carpaccio dressed simply with a jade-green parsley oil, some lemon zest and a dollop of house “ricotta”, which is more like creme fraiche. The thing that puts Fethard on the food map for me is the pickled rhubarb, ribbons of sourness bringing a clarity to the fish flavour like spears of sunlight through water.

Each of the courses has a vegetarian alternative. In the case of the brill it’s a roasted aubergine focaccia, which eats so much more impressively than it reads – toasted seeds on the aubergine, and more of that tangy cream, team with the vegetable roasted as carefully as meat. The bread is finished with a grassy olive oil that nails everything together.

Toasted hazelnuts are the magic finisher on the next course, sweet chunks of purple and golden beets with ribbons of pickled beets, Toons Bridge mozzarella, and leaves that taste of the garden; those toasted nuts round it all out.

The next course is a potato risotto, its tiny cubes of potato cut as small as rice grains and finished with crispy shallots, mussels and spinach. I can see what’s meant, but the creamy unctuousness of a risotto isn’t here, so it eats like a chowder made by someone with a doctorate in knife skills. It’s delicious, just not as perfect as everything else.

The “main course” plate is slices of lamb – almost muttony in flavour, in a very good way – and rainbow chard made so butterly sumptuous I could eat a plate of it. The last time I ate a leafy vegetable this gorgeous it was spinach cooked by the three-Michelin-star chef Alain Passard, during a visit to Ox in Belfast.

My veggie option is a parchment-thin slice of celeriac filled with mushrooms, a masterful Parmesan-and-hazelnut aioli, tiny cauliflower florets and an equally generous buttery serving of chard. There’s a fennel sauce the consistency of single cream over the whole thing that’s begging to be mopped up with mushroom juices and that stellar mayonnaise with some house bread. Either that or we’re licking the plates.

We finish with a layer cake – starting at the bottom with a chocolate rubble, coming up through coffee parfait and mascarpone, and ending in a thick blanket of chocolate sauce.

Mum and I float out of the door into the early summer’s night. The meal has reminded us of the first time we ate at Ox, as well as, for me, the joy and freshness of the Mews in Baltimore. Fethard has a rich food history. Thanks to Dooks it now has a brilliant food future.

Dinner for two with two aperitifs, a glass of wine and tea came to €105.90