Taste of Dublin 2018: What's on the menu at the foodie festival? 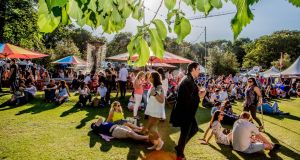 Taste of Dublin returns to the capital’s Iveagh Gardens on June 14th-17th.

Food writer, broadcaster and campaigner Hugh Fearnley-Whittingstall will be the big draw at this year’s Taste of Dublin food festival in Dublin’s Iveagh Gardens (June 14th-17th).

The River Cottage boss has just published his second vegetarian cookbook, Much More Veg, and will be cooking in the Neff Taste Kitchen at 3.30pm on Friday, June 15th. Candice Brown, winner of Great British Bake Off 2016, will also be taking part and will be on stage at 2.30pm and 8.30pm on Saturday, June 16th.

Dublin restaurant kitchens will be well represented throughout the four days - with three members of the Glover’s Alley team in action on Sunday, June 17th. Aoife Noonan will do a pastry demo at 2.20pm, and Andy McFadden and Phily Roe team up for an evening demo at 6.30pm.

Chapter One’s Ross Lewis and Darren Hogarty take the stage at 6.30pm on Saturday, and the Merrion Hotel send out Paul Kelly on Thursday at 8.30pm and Ed Cooney on Sunday at 7.30pm.

The Neff Taste Kitchen will have back to back demos running each day, from 12.30pm until close, and the stage will be the biggest ever built for this event.

There will also be chefs cooking at the Big Green Egg barbecue area throughout the weekend. Simon Lamont, aka The Lazy Chef, brings a new feature to Taste of Dublin this year, a stage called The Lazy Basics, where he will demonstrate handy kitchen hacks, knife skills and cooking techniques.

All that cooking is bound to stimulate appetites, and there are several changes to the food offering this year. Not all restaurants will be present every day, so the menu will change, and there will be a vegan and non-vegan daily specials.

The Eccles Hotel, where Eddie Attwell has taken over the kitchen, will be proving the daily specials on Thursday and Friday and will offer a beetroot, Young Buck and seed granola starter, followed by teriyaki cured and poached trout, and an apple and cucumber dessert.

Banyi Sushi’s Saturday daily specials will be chicken or beef skewers and deep fried jumbo prawns, all with Japanese flavours. Glover’s Alley will be responsible for the daily specials on the closing day and their menu will be aged beef tartare, followed by smoked cheddar and ham hock dumplings, and a dessert of strawberries, coconut and citrus.

Veginity, Moodley Manor and Nut Butter will provide vegan options for the daily specials throughout the event. GBBO winner Candice Brown will collaborate with Roly’s Bistro head chef Paul Cartwright to stage a dessert buffet on the Saturday and Sunday.

The O’Brien’s wine experience has a Mediterranean theme, and Master of Wine Lynne Coyle has matched each restaurant dish with a suitable wine pairing.

Dishes to look out for will include:

King Sitric’s Kelly’s Oysters – served plain or with a variety of accompaniments including Gunpowder gin and tonic and grapefruit.

Tickets for Taste of Dublin cost from €15. Bookings and full programme information available at tasteofdublin.ie.