Matty Matheson in Dublin: 'I flew all the way here to eat cabbage!' 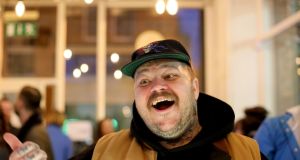 “Is everything today going to be a surprise?” asks Matty Matheson as we begin our eating tour of lesser known Dublin eateries. The plan, I reply, is to take in four restaurants and get a smattering of signature dishes from each, with a few treats thrown in.

“I just want cabbage,” he deadpans, in the tone of one who is deathly sincere about his love of cabbage. “I want cabbage, like, five times.”

At 37, Matty Matheson is among the most famous food personalities on Earth. A working chef since his early 20s, he’s now known best for his TV and online work, comprising two series for Vice and Munchies, and a slavishly adored Instagram account, all of which centre on his magnetic and irrepressible personality.

We’re sitting in Assassination Custard, an unassuming spot opposite Kevin Street Garda station with a couple of tables and a counter behind which proprietors Ken and Gwen are hastily cooking us a special menu. I venture that, if everyone sucked in their tummies and baby oil was liberally applied, you might fit 15 people in here. “Well,” Gwen corrects me, “we had a comedy night here recently, and had 40.”

We laugh, but are soon knocked silent by the first course of the day, piccalilli, pickled beetroot, Knockalara cheese and smoked anchovy. Then comes the smoked salt and buttered cabbage – “See, I flew all the way here to get cabbage!” Matheson shouts with delight as it’s presented – and the knockout dish of the visit, an exquisite small plate of goat kidney served with curry leaf and lemon mayo.

“Wow,” says Matheson as it reduces our table to funereal hush of mumbled joy. “That is proper.

“You know,” he says, “what’s crazy is there’s so many restaurants trying to do this kind of thing but they don’t have the maturity to make something this simple – actual home-cooking but so good.”

I ask if fame has made it difficult to get normal treatment in restaurants. “Hmm, I don’t know if I get treated well, but I must do,” he says. I venture the old Billy Connolly line about the queen thinking the entire world smells like fresh paint.

“Well, my wife hates eating out with me,” he laughs. “If I walk in and the chef knows who I am, they’ll start sending us tonnes of food. It turns from dinner into them turning it on for us. I might just want to spend some time with a person.”

True to form, over the course of our day he is stopped several times by people with the delighted exclamation of “Matty!” before posing for photos and Instagram vids, with the infectious grace which has become his trademark. Matty is a lot of fun to be around, and evinces an un-faked enthusiasm that puts his more staid contemporaries very much in the ha’penny place. People don’t just like Matty, they love him.

Matty Matheson started cooking professionally at 22, having dropped out of cookery school with a few weeks left in his last year – “I just said f**k it and went on tour across Canada with my buddy’s band.”

From there, he worked in high class French eateries throughout Toronto, ending up at Parts & Labour, where he served as executive chef until two years ago. Now, his time is taken up with Matty Matheson: A Cookbook, the book he’s in town to promote, which later culminated in a packed-out signing at Hen’s Teeth on Fade Street, as hundreds of people queued in sideways rain to have their book signed, and meet the People’s Champ himself.

A Cookbook is a deep and meditative trip through his personal history. Part recipe collection, part autobiography, it’s filled with tender remembrances of the food and people who have meant the most to him in his life.

“I wrote it in about a month,” he tells me. “Everyone gave me grief because I was writing it on my phone. Then I went and bought a computer so I could type it and I continued to write it in Notes. My editor was like, can you please just download Microsoft Word? I’d been writing it with no capital letters – they loved me.”

In a fit of exuberance, we travel to our next stop by horse and buggy. Famed for my canny business sense, I forget to agree a fee with our driver beforehand and fork out an eye-watering amount for our 10-minute trip through the Liberties and across the Liffey.

I arrive at Fish Shop on Benburb Street making an itinerary in my head of lesser organs I might sell to get myself back in the black, and we sit down to a forward-thinking menu of incredible seafood. Our favourites are the squid sliders and the beer battered John Dory with chips.

“It’s so good,” says Matheson of the chip held reverently in his paw. “I don’t know why, nowhere in North America do you get chips this good.”

He seems surprised when I tell him fish isn’t held in the same exalted state in Ireland as it should be, considering the quality of its produce.

“Blame the Catholic Church,” offers our server, Nicky before we leave. “People have a hang-up about fish being a Friday thing. It’s not a treat; it’s penance.”

It’s standing room only once we reach Loose Canon in George’s Street Arcade, and we start with a spectacular confit Skeaghanore duck, with wholegrain mustard. Matheson is particularly taken with the porkbelly rillettes with confit lemon and pickled chanterelles. “This is so good,” he purrs. “Most times you make rillettes, the next day it tastes like catfood.”

We are served a ginger beer that has an unmistakable bang off it. “It’s definitely on the funky side,” says owner Kevin Powell, before stressing it’s non-alcoholic. Matheson has been sober for more than five years, following a heart attack at 29 caused by the exertions of his hard-drinking, cocaine-fuelled life as a young chef. Although thoroughly autobiographical, A Cookbook doesn’t dwell on that aspect of his life.

“I’d put in some war stories in there, wilder stuff, of drug use and all that,” he tells me, as we sit down for our last stop, Clanbrassil House, “but they were edited out.

“My publishers were like, are you trying to write Kitchen Confidential?”

“My story is pretty wild,” he concedes, “but I wanted to focus on the food. Chefs need to stop putting on a persona. I think a lot of chefs are starting to clean their acts up and that’s great, because I was definitely one of those chefs; I’ll party harder than you, cook harder than you, sleep less than you. I didn’t want to tell that story here, it’s about my love of food, my family. It’s not about my love of getting f**ked up.

I didn’t spend 15 years cooking to be the funny guy. That’s nice and easy, but cooking is what I actually do

“This is beautiful,” he says, as we eat chopped egg, roasted leeks and chicken skin, although the true showstopper is the 80-day whiskey aged rib of beef, grilled onion and chimichurri.

Before we leave, Matheson heads into the kitchen to praise the chefs. We wonder what’s taking him so long, before realising he’s been cornered by fellow diners for one last obligatory selfie.

Having left the Parts & Labour group two years ago, Matheson no longer has a kitchen job, which I suppose gives him time to go on all-day eating sprees with grateful, if slowly expanding, journalists.

Soon, however, he intends to get back to it. “I’m building a restaurant right now,” he tells me. “It’s going to be a high-end expensive restaurant, a real f-you to a lot of people and a lot of my fans. Full chef whites.

“I didn’t spend 15 years cooking to be the funny guy,” he says. “That’s nice and easy, but cooking is what I actually do – maybe I do still want to prove something.”