Existing EU funds to be redirected to companies in greatest need 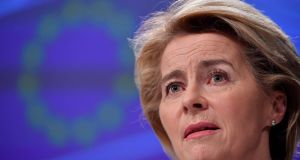 The European Union will boost spending on coronavirus-hit sectors of the economy, it said on Friday, also clearing member nations to run bigger deficits as Germany diverted state funds to cushion businesses against the impact of the pandemic.

The European Commission, which predicted the outbreak would cause the bloc’s economy to shrink this year, said existing EU funds – but no new money – would be redirected to companies in greatest need, backed by a lenient interpretation of budget and state-aid rules. The plan effectively gives a green light to the kind of deficit spending already announced by Italy, the EU country worst hit by the outbreak.

“I am convinced that the European Union can withstand this shock,” commission head Ursula von der Leyen told a news conference.

Germany – long criticised by the commission and other EU nations for running ultra-tight budgets during periods of economic strength – on Friday promised half a trillion euro in guarantees for business in a four-point plan that won a thumbs-up from economists.

Ms Von der Leyen proposed a €37 billion investment initiative based on funds that could be quickly rechannelled to sectors in need, officials said. This revised a figure of €25 billion that she previously announced for the same initiative.

The commission also offered “full flexibility” in its interpretation of fiscal rules, aiming to encourage governments with fiscal space such as Germany and the Netherlands to spend more.