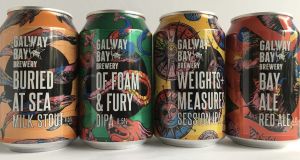 The Oslo in Galway, a brewery within a pub. Last year they opened a new facility in Oranmore

Most craft breweries have switched to cans over the last few years, which has given everyone a chance to give full rein to their creative side with a riot of colour.

My favourite is probably Whiplash (minimalist chic one side, beautiful colourful designs the other) and the beer is great too, but these days visiting the shelves of a craft beer shop is sometimes more like visiting an art gallery.

One of the most striking recent designs comes from Galway Bay brewery. The Irish-Swedish agency M&E, which created Method & Madness for Irish Distillers, is responsible for the new design. “We wanted something related to the coast, the sea, relevant to where we come from,” says co-owner Jason O’Connell.

This was one of the first craft breweries I visited a decade ago. Then it was part of The Oslo in Galway, a brewery within a pub. Last year they opened a new facility in Oranmore. “This was our fourth move and hopefully our last,” says O’Connell. The move has allowed them to offer the full core range in cans. Prior to this only the specials and limited editions were available in cans. The core range will still be available in bottles for restaurants and cafes.

“There has been a huge drive for cans in both the export and domestic market. We were a little late to the party as we had just bought and installed a brand new bottling line and so had to save up a bit for a canning machine.

“Cans are a big thing, I think because they are easier to carry, less likely to break, take up less space and easier to dispose of, too. For the brewer, they offer better branding opportunity. At the moment off-licences in the suburbs seem to prefer bottles, urban outlets seem to be fond of cans.”