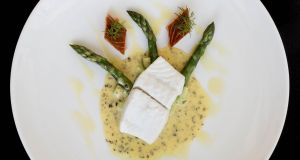 Chocolate, cheese and whiskey were on the menu at the Irish Food Writers’ Guild Food Awards for 2020, presented in Dublin on Wednesday. Makers of these products were among eight recipients of the awards, now in their 26th year. Irish seafood fared well, too, with hot smoked salmon and wild tuna also represented on the winners’ podium.

“These awards highlight the incredible work of small, independent Irish food producers and organisations at a time when supporting local, home-grown industries has never been more relevant or important,” said Kristin Jensen, chairwoman of the guild.

Three Irish food products and one drink were singled out for awards, having been nominated by members of the guild in recognition of their outstanding quality.

In addition, a lifetime-achievement award was presented to Jeffa Gill, who has been making Durrus cheese on the Sheep’s Head peninsula, in west Co Cork, since 1979.

The chef Joyce Timmins was commended for her outstanding contribution to Irish food, in recognition of her work at Dublin’s Rotunda Hospital.

The environmental award was presented to Exploding Tree, a chocolate company based in Clonakilty, in Co Cork.

Falling Fruit Ireland, a community initiative that organises the harvesting and distribution of seasonal fruit growing in public spaces, was the recipient of the community food award.

The awards were presented at a lunch at the Marker hotel in Dublin, where its executive chef, Gareth Mullins, created a six-course lunch featuring the winners’ produce.

Food award: Frank Hederman for Hederman Hot Smoked Irish Salmon (Co Cork)
Frank Hederman’s Belvelly Smokehouse, established in 1982, is best known for its cold-smoked Irish salmon, which is sold worldwide. A request from Selfridges food hall in London for a product that would appeal to US customers celebrating Independence Day led to the development of a hot-smoked salmon product that has become a commercial success. frankhederman.com

Food award: Shine’s Seafood for Shine’s Wild Irish Tuna (Co Donegal)
John and Marianne Shine and their three daughters, Ciara, Erin and Darragh, sell a range of canned and bottled tuna. Their wild Irish albacore tuna is fished for off the coast of Ireland and processed and packed in northern Spain. The fish is hand-filleted and packed in olive oil. shinesseafood.ie

Food award: Inch House Traditional Black Pudding (Co Tipperary)
Inch House Black Pudding is made to a family recipe by Máirín Byrne in Co Tipperary, using fresh pig’s blood. With its distinctive square rather than round shape, Inch House black pudding was commended by the guild for its “outstanding flavour and texture”. inchhousepudding.ie

Drink award: Teeling Single Pot Still Irish Whiskey (Dublin)
Brothers Jack and Stephen Teeling’s Single Pot Still Irish Whiskey is distilled in the Liberties area of Dublin from a 50:50 mix of malted and unmalted barley and matured in virgin oak, former bourbon and former sherry casks. It is one of a range of whiskeys produced at the Teeling Whiskey Distillery. teelingwhiskey.com

Outstanding contribution to Irish food award: Joyce Timmins
Executive chef Joyce Timmins transformed the food at Dublin’s Rotunda hospital, cooking fresh produce from scratch every day and introducing a system of plating up meals adjacent to the wards, rather than having them stored for long periods of time in mobile hot boxes. Timmins is now based at Marymount Care Centre in Lucan, in Co Dublin.

Environmental Award: Exploding Tree (Co Cork)
This Clonakilty-based chocolate company uses Fairtrade cocoa and coconut sugar, and only uses packaging materials than can be composted or recycled. The chocolate bars have an outer sleeve made from agricultural waste and an inner sleeve made from plant-based cellulose. All deliveries are made by bicycle or by post. explodingtree.com

Community food award: Falling Fruit Ireland
Hundreds of fruit trees remain unharvested in Ireland every year, in public spaces such as parks and roadways as well as in abandoned gardens and uncultivated land. Falling Fruit Ireland, set up in 2015 by Bernie Brammick, organises voluntary groups to harvest the fruit and distribute it to charities and deserving causes in the locality. fallingfruit.ie

Lifetime-achievement award: Jeffa Gill
Jeffa Gill has been making Durrus cheese on the Sheep’s Head peninsula, in west Co Cork, since 1979. Gill, who is originally from Worcestershire, in England, was a founder member of the Association of Irish Farmhouse Cheesemakers. Her daughter Sarah Hennessy joined the family business three years ago as manager, and the company now produces five varieties of cheese.