Dazzled by choice in a glamorous new Chinese restaurant

Restaurant review: ‘It's weird not eating this food from some kind of cardboard box’ 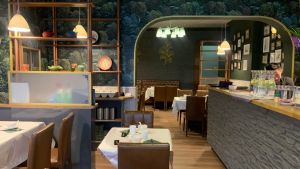 “It’s weird,” the middle son declares as he chopsticks noodles to his face, “that we’re not eating this food from some kind of cardboard box”.

Takeaway accounts for most of our encounters with Chinese food. Plates are not always deployed, much less table cloths like they have here in Kitchen 85. It’s a new restaurant in Dublin’s Marlborough Street, an outpost of M&L Chinese Restaurant on nearby Cathedral Street.

We pass the Pro Cathedral on the way (all other cathedrals are for amateurs) and admire the Department of Education campus, its giant bronze hand like that of a chubby toddler god imploring the clouds in the centre of its plaza. The Luas glides by outside.

The Chinese calendar doesn’t do a leap year with an extra day. There is a whole extra leap month every three or so years to keep the lunar cycle in line. In a Chinese leap year the leap month takes the same name as the month it falls alongside. A western equivalent might be a year with two Februaries. Better still two Julys please.

The joy of a Chinese restaurant like Kitchen 85 is the slightly manic idea that they’ve packed every edible combination they can think of into one closely typed list. You’re not in Kansas anymore with its staple of standard dishes to be scrolled through on a delivery App. This is long and lavish with scattergun elements like salty poached chicken and roast pork or stir fried French beans with olive leaves.

Kitchen 85 feels more like a glamorous good room than its plainer mothership M&L. There is dark green wallpaper showing lush trees in some imagined place where orange trees fruit and flower at the same time. A buddha is taped into a seated position on top of a water feature by the door and in the quietness it sounds like a running tap.

Stone teapots and pots painted arsenic green sit on shelves and velvet cushions line the brown banquette. Our satin tablecloths are topped with white paper ones and finished with dark green paper napkins to match the walls.

Hot-pots are the speciality here. There are so many meat and fish elements to some of the combinations that it’s not so much food with a face as lunch with a line-up. But we don’t get the consensus needed to share one so it’s back to the a la carte.

I am dazzled by the choice but accidentally fall on a great combination that brings home all the best benefits that come from getting out of your pyjamas and going out into the world.

Yes, you could order the salt and spicy flammulina in a takeaway carton but what would emerge at your home would be a sweaty clump of deep fried stuff. Instead the thready long-stemmed mushrooms (think spaghetti with knobs on top) are served fried to a golden crackling crisp with a sprinkling of red chillies and salt, like mushroom scratchings with added spice.

I pile them on top of a plate of crisp aubergine, chip-sized batons that are silky and soft inside with a thin layer of batter on the outside. The aubergine comes with a sweet jam sauce that layers the sharpness of rice vinegar with spice and sugar and needs the nutty warmth of egg fried rice to tie it all down from heading towards a throat-burning sweet territory.

The two noodle munchers get generous plates of nutty thread noodles fried with crisp fresh shards of pepper, scallion and onion and a good lightly spiced sauce. Again you’re aware of how different this food tastes made and eaten freshly. There’s crunch and variety unlike the version that slithers out of the plastic carton where everything has taken on the texture of compost.

There is a king prawn version with large lightly cooked prawns. The other comes with chunks of chicken, juicy close to the bone meat rather than spongy tasteless fillet.

Dessert is a swirly old school ice-cream glass filled with a creamy raspberry ice-cream and an excellent coffee.

Kitchen 85 is a handsome new addition to a street without a great deal of food competition on it. There’s a nostalgic aspect to making a Chinese meal an occasion to sit at a table with a satin table cloth and let a kitchen introduce you to a new set of flavours. Kitchen 85 is a great place to do that.

Lunch for three with soft drinks, coffee and a shared dessert came to €60.75