I can’t think of another vegetable with such wide appeal. Try this recipe 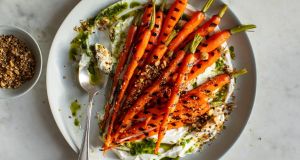 “You ask me what life is,” wrote the great Russian playwright Anton Chekhov. “That’s like asking what a carrot is. A carrot is a carrot, and there’s nothing more to know.” Well, Anton, I think there’s a lot more that can be said and known about the matter.

Almost everyone loves a carrot, from toddlers clutching the little batons to grown-ups at holiday feasts, where a gleaming platter of roasted carrots radiates a deeper, more complex type of sweetness. I can’t think of another vegetable with such wide appeal.

Such a treat are they, indeed, that they’re the symbolic “reward” dangling off the end of so many “punishment” sticks. “Turnip and stick,” “parsnip and stick”: They just don’t have quite the same ring – or the same vivid, bold, happy-making colour, being the white, gnarly roots that they are. It’s easy to take for granted that carrots are, for the most part, orange, but it’s also interesting to dig a little below the surface, and see that it isn’t always so. Listen up, Anton! Life is complex!

Originally, orange wasn’t the predominant colour for carrots; they could have equally been white, purple, dark red or black. In the Netherlands, where orange carrots became popular in the 16th and 17th centuries, the proliferation was mythologized as a show of support to William of Orange, who ushered a revolt against the Spanish that brought about Dutch independence. Many a geneticist, however, would identify carrots’ recessive gene, and selective breeding, as explaining the predominance of the orange variety, rather than any links with the struggle for Dutch independence.

The myths are not just political. They’re biological as well. Carrots are credited with making hair on little heads curl and, of course, being able to grant the ultimate super power: being able to see in the dark. Although all the beta carotene (a vitamin A precursor) in carrots does not help keep eyes healthy, the origins of the somewhat exaggerated claims can be traced back to the second World War when the Royal Air Force was trying to divert the Germans from learning of its plans to develop radar technology. The Germans were, so the story goes, made to believe that all the carrots the British pilots were eating helped them see so well at night.

Myths, legends, baton sticks, regal weapons or revolutionary tool notwithstanding, carrots will always be a majestic vegetable for me. I love the fact that they hold their shape so well and that they don’t lose their vivid orange colour when subjected to heat. These wonderful abilities to retain colour, shape and texture are really what this week’s recipe is all about.

Nestled on a bed of yogurt or labneh, and green oil, the carrots jump out in their vibrancy and sharp form. This contrast is echoed in the textures – creamy yogurt, tender carrots and crunchy dukkah – as well as in a subtler flavour contrast of sweet and sharp.

When serving, I like to retain their original, elongated shape whenever possible. A carrot, like life, can be lots of different things, but I do like a carrot to look like a carrot. Maybe there is nothing more to know, after all.

You can serve these carrots with Greek yogurt, or with homemade labneh, if you start the night before (see tip below). This recipe calls for making your own dukkah: You’ll have more than you need, but keep any leftovers in a sealed container to sprinkle over salads, grilled meat or fish.

A bunch of carrots from your farmers’ market will work best here, but you can also use regular carrots that have been halved or quartered lengthwise. If you can’t find bunches of carrots with their fresh tops, you can prepare the oil using parsley instead, or double the tarragon for an even more herbaceous version.

1. Wash and peel the carrots and trim the tops, leaving about three centimetres of the greens attached. Measure out 40g leafy carrot tops and wash well to get rid of any grit. Squeeze out as much water as possible, and pat dry. Roughly chop the carrot tops then transfer them to a blender.

2. Add the tarragon, 100ml oil and a small pinch of salt. Blitz until completely smooth, scraping down the sides as needed, then transfer the mixture to a fine-mesh sieve set over a bowl. Strain the mixture, extracting as much oil as possible. You should have about three tablespoons. Discard the solids.

3. Meanwhile, prepare a steamer for your carrots by heating water in your steamer or setting a colander over a large pot with a few inches of simmering water. Once ready, add the carrots and steam for 10 minutes, or until you can easily pierce the thick parts with a knife but the carrots are not overly soft. Transfer the carrots to a large, shallow dish along with the remaining 20ml oil, plus half a teaspoon salt and a good grind of pepper. Toss to combine.

4. In a large bowl, whisk the honey, vinegar and a tiny pinch of salt. Set aside.

5. Make the dukkah: Add all the dukkah ingredients to a food processor and pulse a few times until the nuts are roughly chopped.

6. Heat a well-oiled grill pan over high. Working in a few batches to avoid overcrowding, grill the carrots on all sides, about six minutes per batch. Transfer the grilled carrots to the bowl with the honey dressing, and toss gently to combine.

7. Season the yogurt with a quarter teaspoon salt, then spread it out on a large platter. Drizzle all over with the carrot-top oil then add the carrots, arranging them artfully so they’re all facing the same direction. Spoon a generous amount of dukkah on top and pass the rest.

Tips: To make your own labneh, combine 650g plain full-fat yogurt with half a teaspoon salt in a medium bowl. Transfer the mixture to a colander lined with cheesecloth or a clean tea towel, folding the overhang over the yogurt. Place the colander over a larger bowl and top with a couple of cans or other heavy items to apply weight to the mixture. Refrigerate overnight or up to 48 hours, then squeeze out any excess liquid and transfer the labneh to a container. – New York Times