New restaurant brings an authentic slice of Italy to Stoneybatter 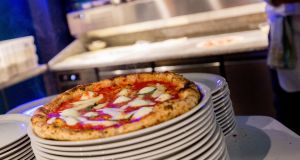 Is Stoneybatter in Dublin 7 becoming the capital’s Italian quarter? Stone is a new pizza spot on Manor Street, just a few doors along from Grano, the family-run authentic Italian restaurant famous for its hand-made pastas and €12 two-course lunch deal.

Stone opened on February 11th, and in its first week in business was so busy that the kitchen ran out of dough an hour before closing time on both Saturday and Sunday. Head chef Alessio Torre had prepared and baked 150 pizzas single-handedly on each of those days. He has now recruited a second pizzaiolo to help meet demand.

Manager Sinéad Curran, who has 15 years’ experience in the bar and restaurant business, said they were surprised by the immediate demand for tables at the 50-seater. “We thought we’d ease into it but it has just been full-on since the doors opened.”

The pizzas are what the head chef describes as Pugliese-style, in tribute to his birthplace, but most would know it as Neapolitan, so think puffy rather than thin and crisp. Before opening Stone, Torre worked at two other Dublin pizza restaurants, Pi on George’s Street and Rita’s in Ranelagh.

Now for something completely different

If calorie-counting and carb-cutting are more important to you than authentic ingredients, there is a pizza of a different sort now available from the Dublin Meat Company.

The Lo-Dough Margherita is being billed as a world exclusive. The base of the pizza, which accounts for 39 of its 302 total calories, is made with a “food innovation”, the ingredients of which are water, wheat fibre (gluten-free), dried free-range egg white, stabiliser (E464), konjac flour, psyllium husk powder and salt.

Lo-Dough is usually sold in a pack of two circular, wrap-like discs than can be used as a substitute for bread. This is the UK company’s first manufactured pizza product. It can be sourced from Dublin Meat Company retailers and online at dublinmeatcompany.com, and costs €5.

Food for the Soul

Food for the Soul with Darina Allen is an International Women’s Day event taking place on Friday, March 6th, at 6.30pm. It’s part of the Mountains to Sea DLR Book Festival (March 26th-29th), and Allen will be in conversation with writer and podcaster Sarah Maria Griffin. The venue is The Studio, at DLR Lexicon in Dún Laoghaire, and tickets cost €15 from mountainstosea.ie.

Some of Ireland’s best food treasures are on the 2,500km stretch of the Wild Atlantic Way, and food writers John and Sally McKenna have traversed every inch of it. You can explore their findings in the 2020 edition of Wild Atlantic Way: Where to Eat and Stay, which is published by HarperCollins on March 5th (£9.99).