Chestnut soup with a wonderful pairing 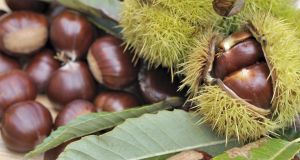 Like other seasonal vegetables, fruits and nuts, sweet chestnuts pair well with other foods that are also in season. Photograph: iStock/Getty Images

If England has the Romans to thank for the introduction of the sweet chestnut into their country, then I suppose we do too. And while there is no evidence for a Roman migration into Ireland that certainly does not preclude trade, which did happen as is evidenced through the discovery of Roman coins buried in the Wicklow mountains.

Sweet chestnut is not to be confused with the horse chestnut, which is more common and not edible. Sweet or Spanish chestnuts have a much more prickly shell and contain up to three nuts. While sweet chestnut trees are found mostly in the east and south of the country (which is usually warmer and drier) they can also be found in the west, if foraging. However, you can pick up cooked chestnuts in most supermarkets.

Chestnuts are best roasted but they can also be poached and then grated. I like to grate chestnuts over chicken. Make sure to peel off the skin of the nut as it is quite bitter. Chestnuts are also great for stuffing and making puree. I have also come across chestnut soup in the course of my research in older Irish recipe books.

Like the Brussels sprout (which I wrote about last week), we seem to have relegated the use of chestnuts to the Christmas period. This is a little unfortunate as they are very versatile. Like other seasonal vegetables, fruits and nuts, they pair well with other foods that are also in season. Vegetables such as celeriac and Jerusalem artichokes work wonderfully with chestnuts, particularly as soup.

How to make Jerusalem artichoke and chestnut soup

Fry off a chopped onion with some minced garlic in a little butter. Peel and chop a kilo of artichokes and add it into the pot.

A few herbs added at this point would be nice. A little rosemary, sage or thyme and a pinch of sea salt.

Cover the lot with chicken or vegetable stock and simmer until the artichokes are soft. Add 100g of chopped chestnuts and 150ml of cream.

Blend until smooth and season with salt and freshly ground black pepper.