Cooking with Conor Pope: ‘My house and the ones on either side reek of boiled bones’ 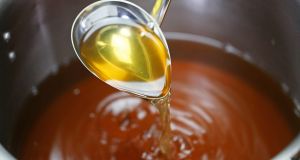 Each week during November, former Celebrity MasterChef finalist Conor Pope will be undertaking a culinary challenge for Food Month at The Irish Times. This week, he tries his hand at making consommé

Never in the field of gastronomy has one man cooked so much for so long with so little to show for it. I am not certain of many things in life, but I am certain that, of all the things I have ever made, this week’s consommé is the most ridiculous.

The story started weeks ago. “Oh consommé is a hoor of a thing to make,” a sound colleague tells me. He has worked in high-end London kitchens where chefs swear and greasy paparazzi stalk minor celebrities and I figure he knows a thing or two about food, so I take his word for it.

Besides, it was either consommé or soufflé and every time I think of soufflé I am racked with guilt over the many, many times as a child I ruined my poor mother’s attempts at making the quintessential 1970s dish by having “a little peek” into the oven to see how it was getting on. I don’t think she ever knew why they never rose for her.

I make sure to put the accent on the é so the butcher knows I know what I am talking about. He looks at me like I’ve just announced I’m vegan

Days later, I take myself off to the butchers in search of the ingredients.

“I would like a bag of bones, good sir,” I say to a ruddy faced man with a spring in my step.

“No bones today,” he says gruffly. “You have to order bones.”

“Eh, okay, I would like to order some bones,” I say, my step ever so slightly less springy.

I make sure to put the accent on the é so he knows I know what I am talking about. He looks at me like I’ve just announced I’m vegan.

It is barely 10am on a Saturday morning and I am dismayed as my evening’s dinner plans are suddenly derailed. I return home with the spring in my step sprung and break the bad news to the Popes. “There will be no consommé tonight.”

They shrug and go back to watching Brooklyn 99 and baking things and tottering around perilously on vertiginous heels, depending on their age.

When Tuesday comes I return to the butcher.

“I’m here for my bones,” I whisper feeling like Christopher Moltisanti on an errand for Tony Soprano.

My ruddy faced friend nods and disappears into a back room and comes out with what can only be described as a bloody leg.

Is that a statement or a question?

He disappears again and from the back room comes the grim sound of saw on bone. It reminds me of the wood chipper scene in Fargo and it is not, in truth, very appetising.

He comes out with the bone cut in two. I order a kilo of stewing steak as well - thinking to myself that it will go well in the stock pot and sure I may as well reward the northside butcher for his recent exertions with a few bob. He has, after all gone to all this trouble to get me a free bone.

He pushes the buttons on the cash register and asks me for €12. I didn’t get a receipt, so can’t say for sure how much the stewing steak cost, but it can’t have been more than €7, which means he has charged me at least a fiver for the bone.

“It’ll be worth it,” I tell myself as I try to stop the still bloody bone protruding from my shopping bag. My neighbours are almost as nosey as I am and I can’t imagine they’d ever let a sighting of a man with a severed limb go unremarked upon. I certainly wouldn’t.

Once home, I roast the bones for the guts of an hour and then take down my biggest pot. It barely holds half the bone, so I will have to make my stock in two batches.

Fourteen hours later the stock is made – and my house and the houses on either side of mine reek of boiled bones. Everyone I live with is in bed by the time I put it in a large dish and then into the fridge so the fat can rise to the top and solidify overnight.

The fridge does its job admirably and I wake up to a thick layer of disgusting looking beef dripping floating like a fatberg on a lovely looking pool of stock. Finally, it is time to make my consommé.

I start assembling the ingredients.

I can’t begin to tell you have far from mirepoix I was reared.

It is, in case you don’t know - and sure why would you - a posh way for saying the base of a stew or soup made by gently sautéing vegetables. In the case of consommé, it’s a bit different. To make my mirepoix I add celery, onions, bay leaves, thyme, parsley stems, peppercorns, tomatoes, cloves, to the stock and some beef mince and egg white gloop. I have forgotten the onion brûlée (onions cut in half and caramelised on the cut side, in case you’re wondering) but it’s too late now, so I go without them.

I watch as all the solids in the pot slowly float to the surface and turn into the kind of sludge you’d be absolutely revolted to see floating past your face while swimming off Dollymount. I make a little hole in the raft of sludge and gently, very, very gently simmer the soup for almost three hours.

“Now, strain the soup through a cheese cloth,” various websites tell me. I don’t have a cheese cloth. I thought I had thousands of baby muslins around but they can’t be found, so I use a tea towel instead.

And do you know what? It is grand. Cheese cloth be damned.

I am told by the internet to let the soup cool so it can be degreased.

Everyone else in the house is in bed for the second night by the time the soup is ready.

I set it aside. “Its day will come tomorrow,” I say.

I am beside myself with the giddy excitement of it all when it is finally time to eat the consommé, or to sip it, or to do whatever it is you do with soup of this nature.

Is it golden? It is! Is it clear? It is! So clear, in fact, you could easily read The Irish Times through a layer of it.

Does it taste good? It does. It has a delicate beefy flavour that hints at the random things that have gone into the mix - or the mirepoix as I now like to say.

Would it fill you up or sustain you on a cold winter’s day? No, of course it wouldn’t, it’s consommé. It is not supposed to be filling, it is supposed to be served as a delicate treat alongside 11 other more hearty courses in the dining room of a French castle.

Am I in a French castle and do I have 11 course of more substantial food to look forward to? Sadly no, and no.

Have I made enough consommé to serve my entire street? Why yes I have and I live on a very long street. I’d invite them all in for soup but, you know, we’re still in Level 5 and anyways I don’t think they’d really appreciate the effort that has gone into it. Maybe next time I’ll buy a tin of Campbells and pretend, because my cheffy colleague was right. Consommé is a hoor to make.