Silverhill, Skeaghanore and Regan’s should be as well-known as our sports stars 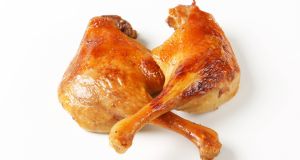 Cooking duck, whether it’s pan frying a breast, confitting a leg, or roasting one whole, is not any more difficult than cooking chicken. Photgraph: iStock

I don’t think it would be unfair to say that Ireland produces some of the best ducks in the world. It’s a terrible tragedy that this isn’t known the world over. Back in 2015, on Ronan Byrne’s farm near Athenry, one of Spain’s top chefs, Albert Adrià, was astonished at the quality of his Friendly Farmer rotisserie duck, cooked over a spit.

Adrià was surprised that the world didn’t know more about our ducks. But this isn’t only a story of Galway ducks. To be honest, we have so many world-class ducks farmers. Names like Silverhill, Skeaghanore and Regan’s should be as well-known as our famous sports stars.

Cooking duck, whether it’s pan frying a breast, confitting a leg, or roasting one whole, is not any more difficult than cooking chicken. In France, they make a dish called Parmentier de confit de canard, which roughly translates as duck cottage or shepherd’s pie.

How to make duck shepherd’s pie

The duck legs are lightly salted, then cooked in duck fat or vegetable oil at 120 degrees for three hours. Allow to cool and then remove from the fat. You can also use prepared duck confit. Shred the meat (four legs is enough) and then add it to a mixture of fried onions, garlic and fresh thyme. When caramelised, add 150ml of chicken stock and cider and simmer while you make your best cheesy mash potatoes.

My tip: One part butter to two parts potatoes. Add cheese to taste, I’d go with a smoked one, Gubbeen perhaps. A little milk to let it down, but not too much. Season both the duck and the potatoes before layering it together (as you would a regular shepherd’s pie).

Bake for 20-25 minutes in the oven until the potatoes are nicely browned on top. My mother used to drag a fork through her potatoes before baking her shepherd’s pie. Whether this was habit, aestheticism, or an attention to caramelising the peaked ridges of the potatoes, I’ll never know.