Can't get to Greystones? Happy Pear launch a new range of ready meals 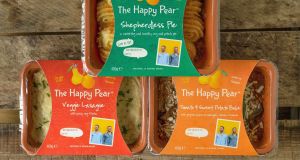 But despite having three times the space that was available to them at their previous location, Elmhurst Cottage Farm in Glasnevin, as well as “another pastry oven, and machinery to take the heavy work out of the process”, Palmer reckons that their output will only rise by about 15 per cent.

“We’re hoping that it will allow us to do more for the people we are already supplying,” he says. The couple currently supply bread and pastries to Proper Order in Smithfield, Thursday to Saturday, and Fia in Rathgar (Saturday). They also sell their bakes at Fusion Sundays in the Dublin Food Co-Op (second Sunday of the month) and the Dublin Flea Market in Newmarket (last Sunday of the month).

The good news for customers for their laminated pastries and sourdough loaves is that they are considering taking on a weekly market, and have been looking at the Herbert Park and the Honest2Goodness venues.

The Happy Pear twins, David and Stephen Flynn, have launched a range of three ready meals (one is vegan, the other two have cheese) that are on sale in SuperValu nationwide, and selected Centra stores. “We’ve been working on our new bakes for around six months. Our aim is to help make healthy food more accessible for everybody, and to get people to eat more veg,” they say.

“All three have been really popular in our cafes over the years, and the shepherdless pie has been one of the most popular recipes on our Happy Heart course.”

There is a veggie lasagne with feta; tomato and sweet potato bake with aubergine, celeriac and cheese; and a vegan shepherdless pie. The recommended retail price is a wallet-friendly €5. The twins also recently launched a healthier version of a popular hazelnut and chocolate spread, Nuts About Choc (€4.99), which is also available from SuperValu as well as the Happy Pear cafes in Greystones and Clondalkin.

Next up for the busy pair is a new cookbook, their third, due to hit bookshops next spring and being published by Penguin.

Food plays a big part in the National Culture Night celebrations at Hook Head Lighthouse in Co Wexford on September 22nd. Those booking the Sunset Tour Experience (€30) will be able to take in the views from the lighthouse watchroom and balcony while feasting on Ballyhack smokehouse smoked salmon – a big winner at the recent Great Taste awards in London – local crab and cheeses, and dessert canapes, served with Irish mead (and a little less local, prosecco).

Down at ground level, the fire pits will be lighting for a barbecue, and local beers, including a harvest brew from the Arthurstown Brewing Company, will be available. There is a programme of live music planned, and all are welcome, free of charge.

The cafe at Newbridge Silverware has had a revamp courtesy of US designer to the stars Carleton Varney, who has channelled the company’s signature shade of blue, and introduced it in a a circus-like candy stripe to the ceiling. Breakfast, lunch and afternoon tea are served, and the space has been renamed Café Carleton. The signature afternoon tea is served Monday to Friday, and reservations are recommended. See newbridgesilverware.com