A trip on ‘Ulysses’: bland pizza clogged with stringy mozzarella 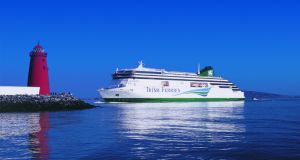 Ulysses: the huge ferry sails between Dublin and Holyhead, in north Wales

It’s a strange sensation to be in the middle of dinner and to realise that the room you’re dining in is moving. For newcomers to long-haul marine travel, ferries and ships can hold a romantic allure that is a pleasant hangover of a bygone era. On Ulysses, the world’s largest car ferry, the delusion of grandeur never quite gets its sea legs, but there’s something much cosier and down to earth about this enormous vessel, which travels daily from Dublin Port to Holyhead, in north Wales.

Ulysses has the clean and functional decor of a regional airport. Also much like a regional airport, its food options are limited to a culinary lowest common denominator. We pass passengers seated in the booths of Boylan’s Brasserie with plates full of battered fish and chips and mountains of curry.

In Café Lafayette my travelling companion and I share, for €10.50, what the menu describes as a stone-base artisan pizza. The reality is a perfect example of the word “artisan” being wrongfully commandeered. The pizza is clogged with such a thick layer of stringy mozzarella that any semblance of a tomato sauce that may lie underneath is rendered redundant. The base is generic and bland. Luckily, a thoughtful friend packed us a road-trip goody bag to keep us going through the night, complete with bottles of the Donegal-brewed SynerChi kombucha, a packet of the Irish Biltong Company’s beef snack, a bar of Chez Emily chocolate and a few packets of Tayto.

On this journey, which leaves Dublin just before 9pm and pulls into Holyhead shortly after midnight, there is plenty of space for passengers to sprawl out on the main deck if they haven’t booked the private cabins upstairs. I am surrounded by expert travellers, fluent in ferry etiquette. By the time I take a full walking tour of the ship (including a look at the cinema and gift shop) many of my fellow passengers have got cosy under their own blankets to get a bit of shut-eye. It’s quite intimate and laid-back. It’s also ideal for some fruitful people-watching, particularly in Leopold Blooms Bar. My curiosity compels me to say hello to a few of them.

A young man named Joe is the drummer in the Jackie McAuley blues band, on his way to play a few shows in London. “See that guy over there?” he says, pointing to a man asleep on the next seat. “That’s the bass player. We have all the gear loaded into the car like Tetris.”

Huddled together in the bar are a woman in her 80s, her son and her daughter-in-law. They are on their way home to the English midlands after a sad trip back to Ireland for a family funeral. It was much cheaper for them to travel by ferry at such short notice.

A young family sit nearby; one child is, finally, asleep, but the other is still full of beans. Their mum, Aisling, is from Co Mayo; the family are on their way home to Manchester, where her husband is from. They bring the car over to Ireland once a year, for a family trip. I ask Aisling’s daughter which she prefers, the plane or the ferry. “I like the ferry, because I can make friends,” she says.

It’s so dark outside that it’s easy to forget you are on a huge vessel packed with cars, lorries and people, sailing through the Irish Sea

Aisling likes the ferry, too. “There’s a long history of Irish people travelling to the UK this way,” she says, and gives us both pause to think of the thousands of people who’ve made this journey before us, for so many different reasons. I’m suddenly very aware of my Repeal jumper, which I’ve worn for comfort on this chilly summer’s eve.

There is something special about travelling through the night from Dublin to Holyhead. It’s so dark outside that it’s easy to forget you are on a huge vessel packed with cars, lorries and people, sailing through the Irish Sea. I stare out of the windows into the pitch black of the water, and it’s only the occasional shudder of the ship that reminds me where I am.