Plus: Free seafood for kids and a re-creation of JFK’s tea party 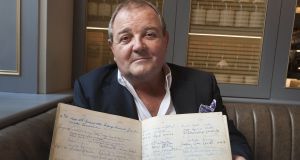 A piece of Dublin dining history

Peploe’s restaurant at 16 St Stephen’s Green recently underwent a refurbishment that included opening up the basement space and installing a very smart bar. “Contemporary New York brasserie style meeting old world elegance of restaurants such as Brasserie Lipp in Paris”, is how the revamp is pitched. But not even Brasserie Lipp has an artefact as unique as that currently on display in Peploe’s.

For the past 12 years, the guestbook of the famed Dublin restaurant Jammet’s, which was open at two venues in the city between 1901 and 1967, has been locked away in a safe. It was purchased at auction at Mealy’s in Castlecomer by Peploe’s owner Barry Canny, who paid €12,000 for it. He has now decided to put it on show in a display case in the restaurant.

Jammet’s, described in a 1928 Vogue magazine article as “one of the Europe’s best restaurants … crowded with gourmets and wits”, attracted a star-studded clientele, and the guestbook reads like a who’s who of the time.

John Lennon’s entry includes a sketch of himself, and a note saying “the other three are saving up to come here”. Other notable signatures include those of Elizabeth Taylor and Richard Burton, Maureen O’Hara, Ronald Reagan, Vivien Leigh, Ingrid Bergman and Walt Disney.

Recipe collections published by cookery schools have the reassuring endorsement of having been thoroughly road-tested, by cooks of varying degrees of competence.

The Cookery School, Donnybrook Fair, by resident tutor Niall Murphy, is a handsome production from Mercier Press (€22.99) that includes some of the most popular recipes from the school’s programme of classes.

Murphy, who left behind a career in the motor trade to retrain as a chef, says that his intention when writing the book was to reflect Donnybrook Fair’s ethos of “simple food really well done”.

It’s Seafood September at Michael’s restaurant in Mount Merrion, Co Dublin, and the focus is on getting children to eat more fish and shellfish. Chef and owner Gareth Smith has devised a children’s seafood menu and will be serving it free of charge to children up to the age of 12.

The offer is valid for one child with each adult ordering a main course and is available at lunch and dinner (until 7pm on Fridays and Saturday).

Adventurous eaters might like to tackle the seafood linguine with mussels, cockles, prawns and squid in tomato ragu, and there are also more child-friendly dishes such as prawn fritti in batter with ketchup and calamari and chips.

“It’s been our observation that our little customers are too often saying no to fish or seafood, despite never trying it,” Smith says. “We’ve converted quite a few and they have gone from asking for nuggets to coming to the kitchen to ask what’s better today, the mussels or the squid.”