“We thought we’d be having a big party,” says one of the brewery's founders 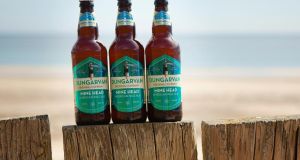 The craft brewers of Ireland have always deserved your support; but now more than ever they really need it, unless you want to go back to the days of being offered half a dozen mass-produced beers in your local.

Dungarvan was one of the very first Irish craft breweries I visited. A decade ago, I went on a whirlwind tour of the country that also took in White Gypsy, Eight Degrees, Franciscan Well and a few others besides.

This has been a bitter-sweet year for the brewery, according to Claire Dalton, one of the two couples who founded Dungarvan. “It was our 10th anniversary on the 9th  of April,” she says. “We thought we’d be having a big party. We will at some stage, but obviously we cannot plan anything at the moment.

“It wasn’t easy before this; everybody was living on the edge, so this could really hurt a lot of people. We aren’t the worst off, as we always had a spread of customers. But we have been through a tough couple of years – it seemed to have improving this year. January and February were up, so we were looking forward to spring and summer – the important months for craft brewers.”

All of the Dungarvan range is unfiltered and unpasteurised cask or bottle-conditioned beers that deliver real flavour. Black Rock Stout, a classic Irish stout, has always been a favourite, although recently I have taken to the Mine Head American Pale Ale, a nicely aromatic, very satisfying beer with a lovely crisp dry finish. Dalton describes it as a west coast style of ale – lightly fruity and hoppy. Try these, or the thirst-quenching Helvic Pale Ale. All would make for great summer drinking. Dungarvan has a wholesale licence (minimum order three cases) and their beers are widely available in off-licences and supermarkets.