Experience the Land of the Rising Sun from the comfort of the couch, with these films, cultural tours, documentaries and recipes 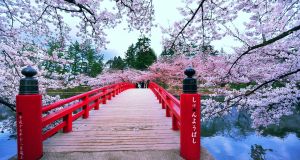 Spring time in Japan with cherry blossoms in full bloom. 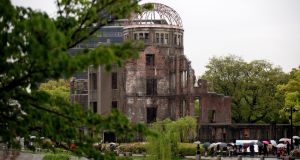 Tourists visit the Atomic Bomb Dome in Hiroshima, Japan. The nearby park, museum and the dome are dedicated to the legacy of Hiroshima as the first city in the world to suffer a nuclear attack, and to the memories of the bomb’s victims who are believed to number as high as 140,000. Photograph: Carl Court/Getty 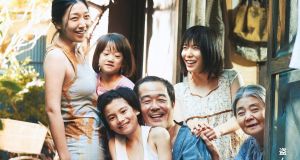 The cast of Shoplifters, the movie 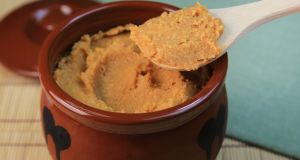 You have to feel for the Japanese Olympics Committee. However successfully or otherwise they battle coronavirus this summer, there’s still the variables of how other countries will deal with the issue and life can return to “normal”. The upshot is at the end of July, there’ll be a Japanese Olympics-shaped hole where our attention should be.

That’s a mighty shame, because while nothing can compare to the orderly bustle of Shin-Juku station or a bite into their unfathomably fluffy bread, there are few better places in which to revel in being a stranger in a foreign land.

My most recent trip to Japan was last November, and not even previous visits could ease the odd mix of displacement and childlike wonder it evokes. But maybe that means armchair travel is the perfect primer for a trip in summer 2021, when the postponed games will finally take place (we hope).

Until the Hiroshima Memorial Museum can be seen in person, the virtual tour (pcf.city.hiroshima.jp) is helpful for a background understanding on how the atomic bomb shattered the city on August 6th, 1945. Though the site is a little glitchy, it shows many of the same videos and images as in the museum, and sobering exhibitions. But for pure escapism right now, there’s also a whole holiday’s worth of 360 experiences to dive into on the Japan National Tourism Organisation’s YouTube channel.

Haruki Murakami is the go-to Japanese author for good reason (1Q84 is a classic, but again, perhaps a little too dystopian for now). Ikigai: The Japanese Secret to a Long and Happy Life, by long-time resident Hector Garcia is more of an inspirational read, or to keep focused on travel, his guidebook A Geek in Japan  introduces the reader to Japan’s idiosyncratic ways through the prism of pop culture. Sparing the blushes of ignorant visitors, it pre-empts the questions you’d want to know, like why women cover their mouths when they laugh, how the yakuza operate, and the many etiquette rules of Japanese bathing (spoiler alert: only foreigners dress for the occasion).

If nurturing a sourdough starter is too passé, it’s time to make your own miso. Only four ingredients are needed: salt, miso paste to start the fermentation, dried soyabeans and koji-activated rice, all of which can be picked up at local oriental stores. The most important ingredient of all is patience, as it needs to be left for months to ferment. After that, you’ll have a uniquely flavoured paste that will add umami flavours to soups, ramens, meats and vegetables – plus serious bragging rights.

Like him or loathe him, there’s a certain enjoyment in watching Amazon Prime Video’s newest travelogue James May: Our Man in Japan, in which the former Top Gear presenter seeks out ridiculous situations and beer (mainly beer) across the country. It ticks off the main attractions, such as skiing in Hokkaido and karaoke in Tokyo, but it’s the micro-trials he faces that reveal the most about Japan. Truly, having your map eaten by a deer and sampling ear-hootingly hot wasabi is what makes for an authentic Japanese experience.

Hirokazu Kore-Eda’s touching movie Shoplifters (on NowTV) follows the fortunes of an extended family who bring in a semi-abandoned girl to their thieving ways. It earned the Palme d’Or prize at Cannes, and an Oscar nomination. It’s also fortuitous timing that the seminal Studio Ghibli bring many of their anime movies to Netflix. Start with Spirited Away, and delve deeper from there.

Few, if any, Japanese acts have found their way into English-centric western culture; Mono, Electric Eel Shock and Shonen Knife are the only ones in this writer’s personal collection. More contemporary offerings can be uncovered in rock duo B’z, or the field of J-Pop, the Japanese-specific pop genre. Those leading the way in J-Pop include AKB48, Official Hige Dandism and Ayumi Hamasak, all of whom prove that radio friendly anthems share a language the world over.

Now’s the time to scour your local area for cherry blossom trees, to experience a little bit of Japan on these shores. To Michelin-starred chef Takashi Miyazaki, the trees near his home in Cork remind him of growing up in Fukuoka. “Sakura in April was also the start of the school year,” he says. “So whenever I’m in the green near my house now, the scent of the cherry blossom tree takes me back to that time and place. It’s beautiful, and it feels exciting, like a time for new beginnings.”