The Euro-Toques Young Chef of the Year competition is 30 years old this month. Three previous winners have created a special menu to mark the occasion 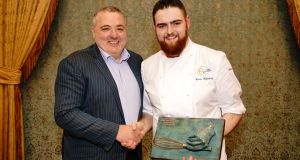 The Euro-Toques Young Chef of the Year competition celebrates its 30-year anniversary this month. Due to the pandemic, this year’s edition of the competition has been postponed until 2021.

However, to mark the 30-year anniversary, former winners Grainne Mullins (2019), Jack Lenards (2018) and Conor Halpenny (2017) have created three new recipes. They take inspiration from the recipes of the organisation’s late founder, Myrtle Allen of Ballymaloe House, celebrating the winter season with a bounty of delicious local products.

The competition, supported by La Rousse Foods, focuses on the development of young chefs in Ireland and aims to inspire them by connecting them to their heritage, culinary traditions and the patient work of small artisan producers, as encouraged by Myrtle Allen.

Since winning the award, Grainne Mullins has opened Grá, a handmade chocolate business, Jack Lenards has worked at a range of top level restaurants including Michelin two-star Restaurant Patrick Guilbaud, and Conor Halpenny has opened his own restaurant, The Square, in Dundalk, Co Louth.

The Euro-Toques Young Chef 30th anniversary menu would make a lovely celebratory dinner, or an alternative Christmas meal. Here are the recipes:

Method
1 For the boxty: First bake the potato in the oven till cooked. Once cooked pass the potato through a sieve or ricer, weigh out 155g and reserve.

2 Whisk all the eggs together in one bowl.

3 Combine all boxty ingredients into one bowl and whisk together until you form a smooth batter.

4 Heat a large frying pan with a generous about of clarified butter. Pour in the batter and cook the pancake for one minute on medium heat. Finish it in the oven at 180 degrees Celsius until cooked through.

5 For the crab: Combine all ingredients in one bowl and reserve.

6 For the cheese: Combine all ingredients in a bowl and reserve.

7 When the boxty is cooked, spread the crab on top, finish with a spoonful of the goat’s cheese. Sprinkle over the rest of the chives on top and serve.

Method
1 Dust the beef in the plain flour. Heat the oil in a large pot and on a high heat, brown the meat in two batches and season with salt and pepper. Remove and set aside.

2 Add the carrot, onion and finely sliced garlic to the pot, season the vegetables and add the bay leaf and thyme. Sweat vegetables on a low heat for 5-7 minutes.

3 Add the meat back into the pot. Pour in the stock and red wine. Simmer gently for about two hours until the liquid has reduced and the meat is tender. You should be left with a rich stew with a thick sauce. Once cooked, set aside to cool.

4 In a pan cook the mushrooms and smoked bacon together for 4-5 minutes, once cooked, set aside to be added to the pie later.

5 For the pastry, sift the flour and salt into a bowl. In a pot melt the beef fat, butter and water on a low heat just until it starts to boil. Pour water mixture over the flour and with a wooden spoon, mix to combine. Leave to rest in the bowl for 20 minutes

6 Flour your table lightly and knead the pastry for 1-2 minutes. Cut the pastry in half and roll the two halves out to a thickness of 2cm.

7 Grease a baking dish with butter and lay one sheet of pastry in the dish. Press it into the sides and prick the base with a fork. Combine the beef with the mushrooms and onions and fill the pie case. Top with the second layer of pastry and pinch the two sheets of pastry together so they are sealed.

8. Cut one hole in the centre of the pastry lid to allow the steam escape and then brush all over with a beaten egg. Place the pie into the oven to bake for 40-50 minutes, until the pastry has a deep golden colour.

9. Serve with creamed potato and a watercress salad.

The smell of the Guinness bubbling with the sugar and butter is always the start of Christmas for me. Our cake of choice for Christmas is a porter cake. My mother is always the one to bake the cake, but I was always allowed to help out and I loved licking the spoon.

The combination of the fruit with the rich molasses flavour that comes from the ale and the hint of spice makes this the perfect cake for Christmas. We aim to have ours made in November and a dash of brandy is poured over it once a week until it is time to serve up on Christmas Eve. Keep it in a tightly closed tin until Christmas.

I have made a few tweaks to the traditional recipe to enhance on the rich molasses flavour. Using BiaSol, a spent grain flour, adds another depth of flavour to this already delicious cake.

Homemade almond icing is superior to shop bought so I have included it if you have time to make it.

Method
1 Prepare a 25cm baking tin. Line the sides and bottom of a deep, round cake tin with a double layer of greaseproof paper and brown paper. The paper should come up at least 1cm higher than the sides of the tin.

2 Place butter, sugar and all of the dried fruit in a saucepan, add the tea and stout. Bring to the boil, and the lemon and orange zest. Then take it off the heat, leave to cool.

3 Preheat your oven to 150 degrees Celsius.

4 Add the eggs one at a time until completely mixed through.

5 Sieve together the flours, spices and baking powder.

6 Mix in the flour and spice and ground almonds.

7 Mix in the whiskey.

8 Put the cake mix into the prepared tin and bake in the oven until a skewer inserted into the cake comes out clean, approximately three hours.

9 When the cake is cooked, brush it with a couple of tablespoons of brandy or another liquor of your choice. Wrap immediately and place it in a tin as this will trap the heat and form steam which in turn will keep the cake soft on top.

10 When it has completely cooled, remove the cake from the tin and rewrap in foil and store for at least three weeks to improve the flavour.

For the marzipan:
1 Begin by sifting the icing sugar and caster sugar into a large bowl, then stir in the egg.

3 At this point stir in the ground almonds and knead to form a firm paste on a surface lightly dusted with icing sugar. Then roll out the amount needed on a clean surface dusted with icing sugar, and keep giving it quarter turns (to keep it round) between each roll. Once it is rolled to the right size, cover the top of the cake with the marzipan. You can top the marzipan with fondant icing, or leave it plain.