How to make the best ever French onion soup

Will it take ages? Do I use beef or chicken stock? What cheese is best on top? Here are some tips from the experts 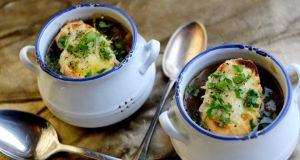 How long does it take to caramelise onions? The answer to that cooking conundrum is about the same as how long is a piece of string, and it’s the technique that recipe writers fudge over more than any other. There’s something daunting about instructing a home cook to hover over a pan for about the same time as it takes to watch a good movie, so sometimes recipes don’t fess up to the time involved.

In truth, much depends on the type of onions, the pan you’re using, the amount of onions, and the size you slice them. But one thing is for sure, if you want to achieve the depth of flavour that makes a great bowl of French onions soup, set aside at least an hour, maybe two, to achieve the melting, fudgy texture that’s required.

But patience is rewarded here, and if you want that profoundly savoury taste that characterises this soup, it’s necessary. Said to have originated in the pre-dawn food markets of Paris, where it was enjoyed equally by workers beginning their day and revellers ending theirs, French onion soup is a winter warmer labour of love that gives back in spades. Traditionally the hot broth comes topped with toasted baguette and melting, stringy cheese.

First up, what onions are best to use for this bistro classic? Chef Graham Neville of French restaurant Dax, in Dublin 2, is a big fan of the slightly pink skinned Roscoff onions. He once flew to the Italian Alps for a cooking demonstration with kilos of them in his luggage, that’s how much he rates them. But he says that Cevennes onions are also good for this soup, and at the moment he is using organic Irish onions from Castleruddery Farm.

The French onion soup at l’Gueuleton restaurant on Fade Street in Dublin 2 has a loyal and enthusiastic following, and is a menu staple there. Head chef Ben Dineen opts for Spanish onions.

“We tried a few other varieties over past few years but Spanish onions give the best caramelisation, witha deep, sweet colour and taste profile. We sauté them slowly for about two to three hours in butter, thyme and bay leaves. Eventually we add port and white wine, deglazing and then reducing, then we go in with a simple vegetable stock.”

The soup is topped with slices of the restaurant’s house-made baguette and a mixture of Gruyère, Parmesan and Comté, glazed under the grill. The finishing touches are freshly grated Parmesan and snipped chives.

For a more simple style of French onion soup, a trawl of the Irish Times recipe archive revealed four recipes, by Lilly Higgins, Carmel Somers, Donal Skehan and Domini Kemp, each a little different, but all following the basic principles. Paul Flynn goes off-piste with his onion soup, leaving Paris behind in favour of a cream of white onion soup with Cheddar and apple, but that too relies on gently sweating the onions for a long time.

When it comes to how long you’ll have to devote to caramelising the onions, our archive recipes vary between one to two hours (Lilly Higgins, for 1.5kg of onions) to 30 minutes (Donal Skehan, for four large onions).

There are a number of ways to help speed this process up. You can add some brown sugar or balsamic vinegar to the buttery onions, and baking soda is also said to speed up the caramelisation. If you have more time, you can also start the process on your hob, then transfer the onions to a slow cooker, and walk away. But the best results come when the onions are given enough time in the pan for their natural sugars to just do their thing.

If the onions begin to stick to the bottom of the pan (and do use your heaviest, most robust pan for this task), don’t worry, just loosen it up with a spoonful of water and scrape it off the bottom of the pan. This is the “fond”, the French term for the delicious crusty brown bits, and they will build flavour.

When you’ve put the time in - and it won’t take constant watching, just fairly regular check-ins, it’s time to add the liquid. Graham Neville says, “fresh chicken stock is best and if it needs a boost, add a stock cube.” Lilly Higgins and Donal Skehan opt for beef stock for their recipes. Domini Kemp also uses beef stock, but takes a rather more radical approach, browning some beef and then caramelising the onions in with the beef, for a sort of one-pot stock and extra beefiness.

Carmel Somers uses either chicken or pork stock in her Irish take on French onion soup, and cooks it with cider rather than the more usual splash of sherry, topping it at the end with toast and melted Gubbeen cheese.

Gruyère is more traditional, but Irish cheesemakers are having a tough time, so support them if you can. Seamus Sheridan of Sheridans Cheeesemongers, who says he makes French onion soup once a year, “during that winter walking first week of January”, recommends Templegall, a strong, nutty flavoured cheese made in Cork. “I am already dreaming about it,” he says.

1 Melt the butter and olive oil in a large pan over a medium-high heat. Add the onions and cook, stirring regularly until they begin to soften. Lower the heat and cook until the onions are very sweet and golden-brown. You will need to stir them regularly and it can take one to two hours. Add a tablespoon of water if they begin to stick too much.

3 Meanwhile, grill the thickly sliced bread on one side. Butter the untoasted side and spread thinly with a little Dijon mustard. Sprinkle the grated cheese on top of the toast.