Victoria’s Secret: Is it just ‘Playboy’ in disguise?

The underwear store, which opened in Dublin this week, celebrates a narrow version of femininity

About 500 shoppers and a dozen animal rights activists turned out for the opening of Victoria’s Secret on Grafton Street in Dublin on Tuesday, December 5th. Video footage: Tanya Sweeney 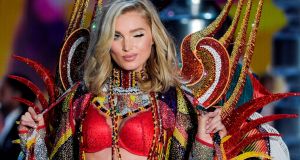 Like every great American brand – Starbucks, Abercombie & Fitch, American Apparel and, for one divine afternoon in 2015, In-N-Out – Victoria’s Secret has landed on our shores with no small amount of fanfare.

Sure enough, the Grafton Street emporium, with its Barbie pink walls, shiny staircases and supermodel shrines, is billed as an ode to femininity and empowerment. The vibe is certainly boudoir-luxe, with a smattering of Fifty Shades, but y’know, In A Good Way.

The 2,700sqm store holds every kind of bra, pants and slip known to girlkind, and no shortage of “outerwear” too. A sateen bomber, priced at €139, holds pride of place on the ground floor. The underwear sets are accented with lace, gold and silver details, or lace-up finishes. Elsewhere, T-shirt bras sell at two for €62 – a friendly enough price point for young shoppers in thrall to the brand. Located throughout the store, the perfumes carry names like Tease, Bombshell, Very Sexy and Crush. The air is sweet with floral notes.

Yet on closer inspection, the bras seem a bit flimsy. A bit meh. A triumph of sexy, playful style over support. This is probably the entire point of a brand aimed largely at under-30s, but still.

It’s not quite the proudly bald tackiness of Ann Summers, but not the reassuring tactile luxury of La Perla, nor the sturdy engineering of Rigby & Peller. In fact, when it comes to creating a brand synonymous with luxury and sexiness, Victoria’s Secret – a closer cousin to Agent Provocateur than to Penneys, in marketing terms at least – might well have pulled off the biggest smoke-and-mirrors coup yet. We may think unabashed glamour and opulence when we think of Victoria’s Secret, but in truth, this underwear is not out of the ordinary.

The bra sizes themselves go up to 38DDD, meaning that, as a 34G, I’d probably have a job on my hands trying to wear one.

Adriana Lima admitted to the Telegraph that for 10 days before a Victoria’s Secret show, she cuts out solid food and consumes only liquid

This might be my biggest bugbear about Victoria’s Secret. It’s a blinging ode to femininity, albeit a very singular version of it. When it comes to body positivity and inclusivity, Victoria’s Secret leaves much to be desired.

At the annual Victoria’s Secret show, the Angels – the genetic lottery-winning models who strut down the catwalk like thoroughbreds in bras worth several million dollars – will gladly describe being there as the acme of their career. Screened in 192 countries, it is, to quote stylist Philip Bloch, the “Super Bowl of panties”.

The Angels are lean, strong, peachy, glistening with glamour and health. But to get themselves match-fit, the Angels reportedly resort to extreme diet and exercise regimes for the prestigious role. Adriana Lima admitted to the Telegraph that for 10 days before a Victoria’s Secret show, she cuts out solid food and consumes only liquid, limiting her water intake 12 hours before the show to “minimise bloating”. She also ramps up to two workouts a day. Sounds extreme, but if they don’t pass muster, the women don’t work. Erin Heatherton, a former model for Victoria’s Secret, has revealed that she was pressurised to slim down. Despite exercising twice a day, she was reportedly unable to reach the weight specified by the company (according to one report, body fat should be under 18 per cent and waists must be 24 inches or less).

In 2013, former Angel Kylie Bisutti released a tell-all book called I’m No Angel: From Victoria’s Secret Model To Role Model, revealing exactly why she’d quit the brand at the height of her fame. “I realised I didn’t want to model anything that sold sex. [When] a Victoria’s Secret lingerie show was airing on TV . . . I saw loads of tweets from women comparing themselves to the impossible image of the models. I realised my career was sending a bad message to women about confidence and body image,” she wrote.

On the one hand, Victoria’s Secret is synonymous with female empowerment. They’re not so much selling knickers as they are a lifestyle; of wealth, glamour and self-confidence. But why does cellulite and self-confidence – or bingo wings and beauty, for that matter – have to be mutually exclusive?

There’s something about Bisutti’s language – “sold sex”, “bad message to women about confidence” – that puts me in mind of the gilded cage of the Playboy Bunny. And, much like Hef’s beloved bloke bible, Victoria’s Secret celebrates one very specific, retrograde, version of femininity (Ashley Graham has already called the brand out for not inviting plus-sized models into the show). It’s a glorified Miss World, albeit one that participants need the iron will of Olympians to get involved in.

Victoria’s Secret is a decidedly female brand, yet its founder, Roy Raymond, appears to have created the company with the sensitivities of men in mind (according to lore, he noticed how embarrassed he felt trying to buy underwear for his wife in a regular department store). But there’s something in this: Victoria’s Secret is the first lingerie brand that has encouraged male buyers to openly lust after underwear.

Nothing wrong with that, of course. The liking and wearing of nice smalls isn’t an anti-feminist act. And I like to think I’d be first in line to celebrate female sexuality. But it might be nice if we did away with the myth that Victoria’s Secret is in some way synonymous with female emancipation.

Maybe now’s a good time to be reminded that they’re just knickers, and not extraordinary ones at that

And in a world where self-worth is increasingly becoming index-linked with waist size, bra size and overall physical appeal, what of the non-Angels among us? If being professionally beautiful constitutes a sort of moral triumph, are the rest of us somehow failing?

There was a slight changing of the guard this year when Brazilian model Lais Ribeiro was praised for bearing visible stretch marks during a show. But if stretch marks are some kind of radical act, the organisers of Victoria’s Secret have some way to go.

This year, we’ve strived hard to debunk the conceit that the most important quality women have is ornamental beauty. It’s easy to get seduced by the plutonium-grade glamour of Victoria’s Secret. But maybe now’s a good time to be reminded that they’re just knickers, and not extraordinary ones at that. Appreciating female beauty isn’t anti-feminist, but now might be a good time to find our inspiring role models elsewhere. To hell with what they look like.