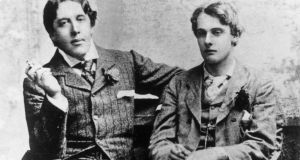 Oscar Wilde and Lord Alfred Douglas in Oxford in 1893. Nicholas Frankel insists Douglas “knew and loved Wilde more intimately that any other individual in the period”. Photograph: Hulton Archive/Getty Images

Additions to the extensive Wilde canon have found new perspectives on a well-examined, but by no means exhausted, subject by paying particular attention to distinct periods in Wilde’s life; David Friedman’s Wilde in America and Antony Edmonds’s Oscar Wilde’s Scandalous Summer are recent examples. The most successful of these I have encountered is Nicholas Frankel’s Oscar Wilde: The Unrepentant Years, which examines in fascinating detail Wilde’s prison years and the short time that remained to him after he completed his sentence in May 1897.

Frankel, who is professor of English at Virginia Commonwealth University, is highly regarded as a Wildean scholar. Although his starting point is 1895, when Wilde was 41, the clarity of his prose, his sympathetic approach, and his talent for building tension ensures that his book will appeal to anyone with even a passing knowledge of Wilde’s life. Until “his swift and fatal decline in 1900”, Frankel contends, “the keynote of Wilde’s exile was . . . laughter”. Biographers who frame Wilde’s later life in the context of “decline and martyrdom distort the truth of those final years”.

To open, Frankel exposes the harshness of the Victorian prison system and examines how Wilde’s experience of a regime “designed to break the spirit of even the toughest offenders” almost provoked his “complete breakdown”. Fearing he was losing his brilliant mind, he would ask visitors if ‘”his brain seemed all right”. Access to books, and permission to write, eased his despair and allowed him to imagine a literary future beyond bars. As Frankel points out, Wilde’s “euphoric enjoyment of his new freedom”, documented in irrefutable detail, counteracts images of him as a broken man, a spent force. In a letter to actress Fanny Bernard Beere, Wilde described being “dazed with the wonder of the wonderful world”, adding, “I feel as if I had been raised from the dead”.

Wilde’s generosity in campaigning for prison reform is dealt with expansively. “Of course I side with the prisoners,” he told Maj Nelson, governor of HM Prison Reading, “I belong to their class now”. Invoking his status as an ex-con, he wrote two uncompromising letters to the Daily Chronicle advocating reforms that would alleviate “hunger, insomnia and disease”. Frankel’s extensive analysis of The Ballad of Reading Gaol, twice cited in parliamentary debate, contrasts somewhat with the narrative style of the rest of his book but is a valuable inclusion nonetheless.

The most controversial aspect of Frankel’s approach is his rehabilitation of Lord Alfred Douglas. Citing compelling evidence of Wilde’s “unquestionable and deep-seated love” for Douglas, he insists: “The ill-fated reunion of Oscar Wilde and Lord Alfred Douglas in Naples is one of the most misunderstood and misrepresented events in the history of literature”. Testimony from Douglas, who wrote extensively about his relationship with Wilde, is often discounted by biographers who regard him, with good reason, as self-serving. Frankel insists that Douglas “knew and loved Wilde more intimately that any other individual in the period”. To view Wilde as Douglas’s victim, he maintains, is to “rob him of all agency”. Wilde himself vowed, “I must remake my maimed life on my own lines”.

Frankel contends that Wilde “knew perfectly well what he was doing and risking in returning to Douglas”. As early as August 1897, he told the younger man: “My only hope of again doing beautiful work in art is being with you.” Here, Frankel presents Douglas as a literary figure, reminding us that he was lauded in his lifetime, and that poet AE Housman, albeit without evidence, saw his hand in The Ballad of Reading Gaol. In Frankel’s opinion, Douglas “would have been distraught at the idea that he had ‘wrecked’ Wilde’s life”.

Although Wilde produced no new work of note after The Ballad of Reading Gaol, Frankel presents testimony from friends and acquaintances of this time, including valuable accounts from marginal figures, to demonstrate that he had lost none of his captivating fluency. Laurence Housman described him as “a man haunted by his own powers of speech and imagination”, while Vincent O’Sullivan, one of his earliest biographers, suggested his pervasive presence in the cafes and bars of Paris was his response to his realisation that “he would go mad if he sat alone with his bitter thoughts”.

Frankel vividly conjures up Wilde’s final months, characterised by “a peripatetic, day-to-day, hand-to-mouth existence with no direction or plans”. Drinking heavily and desperately short of money, Wilde employed a series of increasingly elaborate ruses to extract cash from those he met. Frank Harris, loyal supporter and one of many promised new work, railed “everyone grows tired of holding up an empty sack”. Yet, there is consolation to be found in Frankel’s insistence that, right up until his final illness, unable to write and desperately disappointed at being separated from his beloved sons, Wilde still “carried himself with a threadbare majesty”.

Eleanor Fitzsimons is a writer, researcher and author of Wilde’s Women: How Oscar Wilde was Shaped by the Women He Knew