The thing I forgot to do before my father died 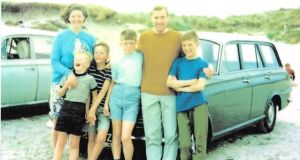 One Tuesday evening in the middle of September the artist Oliver Jeffers unveiled a portrait before an audience of 25 in a decommissioned swimming pool, and one-time Blitz mortuary, on Belfast’s Templemore Avenue. Two minutes later – two minutes in which, knowing what was about to happen, I studied every inch of the canvas – he lowered the portrait into a narrow bin filled with lilac enamel paint, withdrawing it only when the paint had risen to just below his subject’s eyes.

The performance – for it was as much performance as exhibition – was the latest in a series of Dipped Paintings by the artist that stretches back to 2012. The subjects are all people who have witnessed death at close quarters. As well as executing a portrait, Oliver Jeffers has in each instance conducted an interview, from which he has created a single sheet of text, written in a hand instantly recognisable to anyone familiar with his many children’s books. This text, which the audience has the opportunity to read before the unveiling of the portrait, is laid on the floor for the dipped painting to drip on and partially erase.

Then artist and audience drink a whiskey toast – as we did in Templemore Avenue Baths – to the transience of all things.

A couple of audience members I talked to afterwards found the performance unsettling, even in one case upsetting. Many of us knew the subject of the portrait, who was standing a little to my left throughout.

For my own part I felt fortunate that I had seen the portrait at all and witnessed its transition to another state, the creation from it of another work of art. I liked the fact too that in this climate of obsessive recording, where even the food we are about to eat can be photographed and uploaded – if not for all eternity then far into the digital future – there still existed such a thing as an unrepeatable event.

The Templemore Avenue unveiling fell 19 days after my dad, Phares Patterson, had a scan revealing the presence of cancer in his lung and (the doctor added ominously, though imprecisely) “a bit of the bone”. He was 85, but until a few weeks before, when he began to complain of back pain, more active than many a person 20 years his junior. (My mum kept a video clip on her phone of him running around their back garden, towards the end of June, having a water pistol fight with one of his great-grandsons. She asked a neighbour the next day whether she had heard the wee boy. “I didn’t,” the neighbour said, “but I heard his great-granddad all right.”)

Nineteen days on from the diagnosis, the doctors were still carrying out tests to determine where the cancer had originated. My dad, though, was already diminishing before our eyes. The family – my mum, my three brothers and I – clung to the hope that his decline could at least be arrested, and that the remaining months of his life, as we hoped they would be, could be made as comfortable and dignified as possible.

Ten days later, as September drew to a close, the word “hospice” was spoken for the first time. By then my dad was in bed more often than he was out, unable to stand long enough to have a shower, and unable to endure for more than minutes at a stretch the company on which he had once thrived.

Despite the steady increases in the morphine dosage, he was still lucid. Lucid enough to insist that my brothers and I go out for a meal together on the Wednesday of the first week in October, 48 hours after a hospice nurse had called to make an assessment and – in answer to my dad’s direct question – told him he had “a few short weeks” to live … “or possibly days”. (My dad thanked him, and shook his hand.) Lucid enough to ask my mum, earlier that Wednesday afternoon, what had happened to the photo he had lent me a few weeks before.

The photo showed my mum, in a red swimsuit, walking through the shallows of the sea on the Co Down coast, holding my hand. I am between two and three, so blond I am almost white, and wearing a pair of blue swimming trunks.

I couldn’t remember ever seeing the photo before.

“I loved you in that red swimsuit,” my mum told me my dad told her. “I only lent it to Glenn to make a copy.”

Don’t ask me how it hadn’t occurred to me that was why he had lent me it. I had simply taken it home and set it upright on my desk, to the right of my computer screen, thinking only that I would keep it a few days before giving it back. After all, I knew where to find it if I wanted to see it again.

Those few days had stretched into a couple of weeks, as days so often had before, with books, DVDs, Tupperware, plates, you name it, passing in both directions. Time was different now, though. Truly of the essence. I told myself I would bring the photograph along to the dinner that night and give it to one of my brothers, all of whom lived, or were staying, close to my parents in the south of the city.

It was a pig of an evening. Absolutely torrential rain. I got stuck in traffic heading back east from my parents’ house to get ready to go out. I had less than half an hour to get turned around and catch the bus into town. In my haste I left the photo sitting on my desk.

First thing tomorrow, I told myself, when I realised what I had done. Not done.

We had dinner – my brothers and I and my mum’s brother, over from Canada to see my dad one last time – we went for a pint afterwards in the bar next to the stop for the bus my brothers and my uncle had to take back to south Belfast. We drank a toast. To Phares.

As I sat on my own bus, going east again, my eldest brother rang. “Dad’s asking for us all.”

The quickest thing to do was to carry on home and call a cab. Which also meant I could make good my mistake and bring the photo from my desk.

So I did, and I did. My brothers, my uncle and my mum were gathered round the bed when I arrived. My dad had his eyes closed. I kissed him, I told him I had brought the red swimsuit photograph, but whether he heard me or, if he had, understood me, I couldn’t say.

The table by his bed was all tablets and tissues and glasses with straws. I set the photo on the windowsill instead and waited with everyone else for what we were sure was his imminent death. But it didn’t come that night, nor all the next day. By Friday bedside vigils had come to seem normal. Other family members – grandchildren, my dad’s one surviving brother – took their turn as well. We were planning care into the weekend and beyond.

Late on Friday night, though, my dad’s breathing changed. I was in the room at the time with my eldest brother. In a matter of minutes my mum and my other brothers were there too. A family of six one last time. We admired my dad’s tenacity, his strength of heart, even as we wished for his sake that he was a little less tenacious, a little less strong, that he could just rest finally.

Phares died at 5.15am on Saturday, October 7th, just 37 days after his initial diagnosis.

I drove back home at 7.30 to break the news to my wife and daughters, while my mum picked out the suit in which the man she had been with since she was 17 would be cremated.

I slept for an hour, showered, tried to think who I ought to notify. As I was getting back into the car, shortly after ten o’clock, to return to my mum’s house (how hard to think it was now singular) I spoke to one of my brothers, who told me that the undertakers had already been and had taken my dad to the funeral parlour. It hadn’t crossed my mind that he would be gone so quickly. It was news to me, too, that my mum wanted a closed casket, though I could see the thing entirely from her point of view. She had loved this man for almost 66 years. Those final few days had altered him too much.

And there was something else. “That photograph that was on the windowsill?” my brother said. “Mum picked it up at the last minute and put it into Dad’s suit pocket.”

My mind went back to the Templemore Avenue Baths and Oliver Jeffers’s ceremonial dipping of his just-unveiled portrait. (I didn’t work out until later that that was the exact midpoint of my dad’s illness.) What was that if not art doing what art has always done, creating the one thing that spoke for the many? That allowed the viewer to rehearse or revisit an experience that would befall us all?

I was telling myself it would be possible to recreate the photograph of my mum and me – to unearth the VHS, and a player to play it on, to pause the tape again at that particular frame – possible even, with the advances in technology, to improve on it.

Even before I arrived, though, I had come round to the thought that, as with Oliver Jeffers’s portrait, it was enough that I saw it at all. And anyway, it was never mine to begin with. It was my dad’s.