How Cromwell’s Irish terror made a bloodthirsty preacher teach tolerance

John Owen had encouraged Cromwell’s troops to avenge the deaths of the 1641 rising, but horrified by what he witnessed in Ireland he championed religious toleration 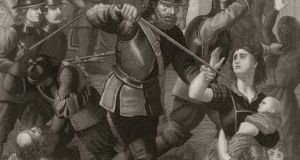 Ireland’s first revolution was part of a long religious war. By 1649, the island had been in turmoil for eight years, since unrest in Ulster had spiralled into a national conflict involving five independent armies, from three nations, in a bewildering succession of alliances. Devastation, disease and death were widespread. But Cromwell’s invasion, in August 1649, brought these conflicts to a halt. In nine months, he achieved, for the first time in hundreds of years of English intervention, the entire subjugation of Ireland. His goal was a massive extension of English power and Protestant religion.

Cromwell’s military administrators pursued the pacification of Ireland with ruthless efficiency. Before their departure from England, his soldiers had been encouraged by the preaching of a young puritan to avenge the “blood of almost-expiring Ireland” – to avenge the deaths of Ulster Protestants that had occurred during the rising of 1641. And many soldiers took this encouragement to heart. At times, the military’s implementation of Cromwell’s political vision was so stringent that the Lord General himself intervened to grant exemptions from their policy of ethnic and religious cleansing. Their victims endured a catastrophe, and the results would be enduring. In 1641, Catholics owned 60 per cent of Irish land; by 1662, that proportion had been reduced to 20 per cent. And the death toll resulting from a decade of civil war and another decade of occupation was simply horrific.

The Cromwellian invasion of Ireland was a turning point for its victims. We are all familiar with this period’s tragic history of loss, dispossession and death, much of which is remembered on Trinity College Dublin’s widely celebrated 1641 depositions and Down Survey (1656-58) projects. But the invasion was also a turning point for the victors.

Nothing could have prepared the English soldiers for their experience of the Irish war. They were put to work in an unfamiliar environment, suffered continually from overstretched supply lines and died from unfamiliar diseases. They faced an enemy that they often could not see and that avoided the military tactics they took for granted. In Clonmel, in May 1650, the New Model Army suffered one of its worst defeats in the civil wars. The English army enjoyed some notable victories – and it was painfully outsmarted.

The consequences of war were also significant for English civilians. A large community of family members, civil servants and religious leaders accompanied the 18,000 English troops. One of the most important of the latter group was John Owen – the preacher who, only months before, had encouraged the departing troops to avenge the deaths of the 1641 rising, and who would go on to become one of the most significant religious and educational leaders of the 1650s, and a key theorist of religious toleration in the 1660s and beyond.

Owen’s Irish experience was harrowing – and it forced him to reconsider his religious justification of the war. He found life inside the wartime capital chaotic. He was horrified by what he witnessed in the administrative centre of the invasion. He described “poor parentless children that lie begging, starving, rotting in the streets, and find no relief … persons of quality ... seeking for bread, and finding none.” He was shocked to see new religious movements taking advantage of the chaos and dislocation of war. One women, recording her experience of religious life in the city, was deeply affected by the preaching of a boy, whose ministry reflected the craze for the unusual among believers who thought that the world was close to an end. The content of this preaching was also unexpected. Educated clergy were forced to compete with self-appointed preachers who proclaimed themselves “to be God ... in the open streets with detestable pride, atheism, and folly.” In Dublin, the religious world was turning upside down.

As the soldiers marched out of the city, towards Drogheda, Wexford and other strategic targets, Owen set about preaching to the civilians who remained. They were an odd assortment of people. Penniless Protestant refugees from other parts of the island sat alongside recent arrivals from England, while others had the very different experience of life in New England and the Caribbean. Another puritan preacher, whose congregation met in Christ Church cathedral, described the Protestant community in Dublin as “sighing and sobbing in a strange Land”. Many of these people were emotionally distressed, and that distress manifested itself in some very unusual behaviour. But a number of them recorded the influence of Owen’s preaching, providing hope and confidence amidst the chaos of the war.

Owen’s experience of the Irish conflict was formative. He preached in the city’s churches, and wrote theological treatises in Dublin Castle, while the Cromwellian soldiers swept up and down the east coast, and began to settle the interior. He shared in the army’s losses and its victories. Two of his brothers had joined the campaign. Captain Philemon Owen died in 1651, the same year in which another brother, Henry, an army major, became the governor of Maryborough, as Portlaoise was then known, the first step towards his later career as an Irish MP.

Owen’s experience of the conflict forced him to reconsider the language with which he had encouraged the campaign. His question centred on how best to represent the fact that “God did not send his Son into the world to condemn the world, but in order that the world might be saved through him” (John 3:17). So, he wondered, in an address to Westminster MPs, “How is it that Jesus Christ is in Ireland only as a lion staining all his garments with the blood of his enemies, and none to hold him out as a lamb sprinkled with his own blood to his friends?”

Owen’s answer to that question changed his politics. The invasion of Ireland had not really advanced “the sovereignty and interest of England,” he realised. “I could heartily rejoice, that, innocent blood being expiated, the Irish might enjoy Ireland so long as the moon endureth,” if “Jesus Christ might possess the Irish.” Owen would become a key theorist of religious toleration – and his theological convictions were formed during the chaos and trauma of the Cromwellian invasion of Ireland.

Crawford Gribben is a professor of history at Queen’s University Belfast, and the author of John Owen and English Puritanism: Experiences of Defeat (Oxford University Press), which was recently published in paperback