‘When you go to England you’ll get a bicycle, they said. I never did’ 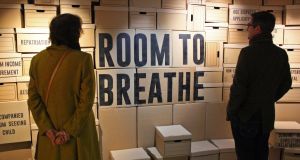 The stories of more than 100 immigrants feature in the exhibition. Photograph: Poppy Williams

“My recollection is that I didn’t want to come,” remembers Cathy Robinson, resident of Lewisham in south London, in an accent that reveals little of a childhood home in Kerry left more than 60 years ago.

“When you go to England you’ll get a bicycle, they said. I never did.”

Vivid, however, is the trip across the Irish Sea on the ferry where, “it was nighttime and the lights were reflected on the water. It was so lovely because I had never seen anything like that; I’m from the depths of the country and when it was dark, it was just that.”

► CLICK TO LISTEN: Cathy Robinson: 'We were all white, but I was treated very differently... I had an Irish accent but I didn’t know that then.'

And so from a bucolic idyll on the west coast of Ireland to the tumbling down chaos of post-war London, the family landed into the burgeoning metropolitan centre south of the Thames. Sixty years is a long time ago but for Robinson, her arrival and those first few years in the UK remain close to the surface, knitted into the fabric of her identity.

While some of her stories segue into the collective memory of Irish migration, heady encounters with an environment so alien and so new, others, like her father growing red geraniums to combat life without a garden, bristle with poignancy.

Robinson is one of a number of Irish migrants in London participating in the ‘Room to Breathe’ exhibition, which opens at the Migration Museum Project (MMP) in London this weekend. A funded organisation for the last five years, the Migration Museum Project is the first of its kind in the UK. It seeks to locate migration at the centre of the nation’s life, not only by addressing shifts in politics engendered by migration, or the enrichment of British cultural life, but by offering a space for people to tell the stories of their journeys themselves; to spend some time in the day-to-day of it all, and in doing so, shine a spotlight on the ordinary lives we live, right alongside each other.

Previous exhibitions hosted by the MMP include ‘Call Me by My Name: Stories from Calais’, and most recently, ‘No Turning Back: Seven Migration Moments that Changed Britain’, both of which addressed large-scale movements of people.

This new exhibition examines the private moments of lives in transit, in vignette form. Using seven rooms built in replica as a means to tell these stories - a bedroom, a kitchen, a classroom, a barbershop amongst others - we are invited into intimate spaces offering an immersive experience, where fragments collected from more than 100 volunteers in film, written, audio form impress upon the visitor the joys and the hardships that make up all of our migration experiences.

“None of these spaces belong to one person or one time period,” explains Aditi Anand, the co-curator of ‘Room to Breathe’. “They are imagined spaces. I wanted the rooms to feel like there were these echoes of the past reaching out into the present, and that there is a conversation between different generations of people who have arrived.”

Stories are told in concert with one another. Encounters in the kitchen, for example, that most evocative of domestic settings, could range from a tea set that journeyed from Ireland to be gifted through generations, to the handwritten sequence of spices preserved in recipes that travelled across the globe.

“Some people might have been escaping the Holocaust, but for others (migration) was a very ordinary thing. It is very much a lived experience, and we wanted to capture that and show some of the ways people have carved out certain spaces for themselves, often in an environment that is quite hostile to migration. These are spaces in which people feel a sense that they can breathe and be themselves, a place for them to grow and establish themselves in this country,” Aditi says.

For the Irish participants, the decisions to leave will strike few as surprising. Vanessa Monaghan moved to the city in an effort to recover from trauma following a fire. A decision made on a whim on the 48A bus in Dublin in September 2001 led to a flat in Enfield. Her story in the exhibition is relayed through copy of the oracle-like Time Out. It’s almost impossible to imagine in an era saturated by hashtags that this one magazine offered some of the only clues about where to find your people.

“Trying to get to know the city or anybody in it was really isolating. Now you have Facebook groups like the Irish in London group or local neighbourhood groups, it is a lot easier to become part of a community,” she says.

For other long-time residents like Joseph Healy, it was both the grim economic and social realities of the late 70s that brought him to the capital. “A lot of people had been leaving,” he remembers. “I just felt Dublin was so stultifying - it was very difficult to be gay and have a good relationship. I decided I had had enough and I left.”

In the classroom, nestled amongst stories of first days and favourite teachers, is Cathy Robinson who arrived from Ireland by boat and train to Camberwell. “We were all white, but I was treated very differently. I had an Irish accent but I didn’t know that then.” The complexity of summers spent in Ireland where “I never wanted to go, and when we left, I never wanted to come back” reveal the reality of trying to live in two places at once.

Listening and reading similar narratives from all over the world, in rooms that are familiar to all of us, is a powerful experience.

“We don’t want it to be a static exhibition,” Aditi says. “We’re planning to have cooking exhibitions in the kitchen, and have barbers come in and give haircuts. It is a place where people meet and gather and claim as their own.”

The spaces are warm, not just places of longing and of sadness, but also of happiness, celebrating the joy to be found in the freedom to be yourself, go out dancing, meet kindred spirits half a world away, and maybe even fall in love.

John Delahunty is chief executive of the Innisfree housing association, which has served the London-Irish community since the 1980s. Originally the organisation catered mostly for “single men who were working on building sites, who would go on down Cricklewood Broadway and be taken out for the day and then they’d be dropped back in the evening. They’d come and lay their heads down in one of our rooms; and that’s what it was like. Back in those days the Sacred Heart Church in Quex Road needed 13 masses on a Sunday to get all of the people through.”

Some, he says, “have maintained that connection with people at home and some have not darkened the door for 50 years. Some of our tenants disappear for a whole summer because they go home.”

These days, Innisfree places great emphasis on forging links with other migrant communities in the city, and neighbouring groups like North London Muslim Housing Association are important allies in the lobby for better housing for all. Although the organisation now serves many other nationalities, Delahunty estimates that approximately two-thirds of his tenants are still Irish. “That experience of being Irish in another place” continues to buoy the association’s connection to Ireland.

Hannah Little arrived in the UK in 2012. She is a founding member of the London-Irish Abortion Rights Campaign (LIARC), an organisation which rallied Irish emigrants not only in London but around the world to travel home to vote in the Eighth Amendment referendum earlier this year. She says that some of the organisation’s most-committed members are English.

“We were primarily about human rights, that was our focus,” she says.

And in a way, that brings us full circle to those rooms we visit and spend time in at the MMP, leafing through stories, spending time in the small intimacies somebody’s else’s life. The LIARC’s #HomeToVote campaign was received among the Irish diaspora in London with an unanticipated energy, utilising newly established networks in a new home to leverage change, uniting communities on both sides of the Irish Sea. They found their own rooms and spaces: “We were protesting outside the Irish embassy,” Little says, “and it was a proud day when we were actually invited in”.

“It is essential that everybody who lives in this country feels that they belong here,” says the Migration Museum Project director Sophie Henderson. ‘Room to Breathe’ shows us how we can nurture this feeling, by recognising that these stories are all our stories.