As emigration to Australia slows, eligibility for two-year visa increases from 30 years 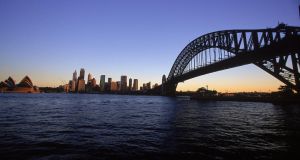 View from Milsons Point of the Harbour Bridge and Opera House in Sydney. Photograph: Nick Wilson

The age limit for participation in the Australian “working holiday programme” has been increased from 30 to 35 years, Minister of State for Foreign Affairs Patrick O’Donovan has announced.

The reciprocal agreement, which also allows Australians to come to work in Ireland, gives participants the ability to work abroad for up to two years.

Mr O’Donovan announced the age extension during an official visit to Australia. Speaking about the agreement, Tánaiste and Minister for Foreign Affairs Simon Coveney said the purpose of the programme was to promote “cultural exchange and strengthen people-to-people links” by creating opportunities for young people to travel.

“This extension of the eligible age not only allows a more diverse group of people to avail of this scheme, but also helps to strengthen those links between our two countries even further.”

Mr O’Donovan said the age extension underscores the “wide-reaching success” of the programme.

Overall, the rates of Irish people moving to Australia have slowed in recent years. In the 12 months to April 2017, just 5,300 people moved from Ireland to Australia, according to the Central Statistics Office, just over a third of the total in 2012, when numbers peaked at 17,400.