The Irish vet stitching up kangaroos and breaking hearts in Australia 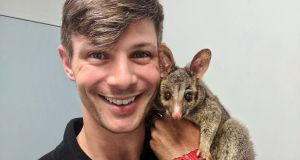 Oisín Tracey at the Native Animal Rescue AU, a wildlife rehab centre in Perth, with Monty the possum who was admitted with corneal ulcers. Photograph: @pawsomedoctor/Instagram

When he’s not stitching up kangaroos, surfing or saving the lives of the pets of Perth, Irish vet Oisín Tracey is tending to his Instagram following of more than 48,000 all over the world.

Since he moved to Australia two years ago, Tracey, or the “Pawsome Doctor” as he’s better known online, has met the President of Ireland, been in a nude photoshoot with Panti Bliss, and become Instagram famous - all while establishing his career as an emergency vet.

Although Australia was not top of his list of places to visit, the 30-year-old Dubliner moved to Perth with his then partner, having just qualified as a vet from UCD in August 2016.

Tracey arrived in Perth better prepared than most. He already had a job lined up at Perth Vet Emergency - an emergency and critical care hospital for small animals - with the prospect of being sponsored for a long term visa by the business if everything worked out, which it did.

Day-to-day at the hospital, Tracey mostly deals with pet emergencies, but one day he was presented with a very different sort of client, a wild falcon. With little prior experience dealing with birds of prey, he had no idea how to treat it.

“It was a combination of ‘Is this animal going to try kill me, if it is, how is it going to kill me?’ and, also, ‘what’s wrong with this animal, what medications can I give it and what can I do with it?’” Tracey says.

“I hadn’t a clue. I was cracking every text book I could find, I was asking people online. I managed to keep it stable overnight and get it to the zoo. T zoo vets took over from there.”

The experience prompted him to become a volunteer with Native Animal Rescue AU, a wildlife rehab centre, where he now encounters wild animals and birds of all kinds.

Whether it’s diagnosing an ulcer on an owl’s eye, or treating the surprisingly common cases of bobtail flu amongst the Western Australian bobcat community, Tracey does what he can for the wild native animals of Western Australia, from the smallest to the largest.

The smallest animal he’s treated so far was a bat weighing just 14 grams.

“The bat weighed the same as basically a spoonful of sugar, I was barely able to examine it,” Tracey says. “I managed to identify that it had a small wound which we were able to clean. I put it on some pain relief and antibiotics because I couldn’t close the wound - the animal was too small!”

Tracey has also encountered Australia’s most famous indigenous marsupial - the kangaroo - during his time in Perth.

“It’s one of those bucket-list items for any vet living and working in Australia,” Tracey says. “It was only a small stitch-up, and I managed to do it under local anesthetic, but it was still quite cool!”

Australia has also brought some of Tracey’s other talents to light - namely his flair for social media. In January last year, he started his Pawsome Doctor Instagram account, and developed a following of more than 48,000.

“It turns out that a gay guy with cute puppies and kittens on Instagram does pretty well!”

Tracey now collaborates with the City of Perth to promote pet-friendly venues around the city, usually with his sidekick Oliver the cat, through his Instagram page. Most recently, he completed a video project with the City accompanied by a black Labrador named Olive from WA Pet Project, an organisation which runs pet re-home and adoption programmes.

Tracey has made many interesting human friends in Perth too, including the Honorary Consul of Ireland, Marty Kavanagh and his photographer husband, Richard Matias. It was a lightbulb moment during a coffee catch up with Matias that led to Tracey taking part in a nude photoshoot with Panti Bliss last year. Matias was working on a book of nude photography in support of WA Aids Council, and Rory O’Neill - aka Panti Bliss - happened to be visiting Perth.

Twenty-four hours later, Matias had 15 minutes to capture a photo with Panti Bliss in full drag, and a completely naked Pawsome Doctor.

Did you even go to Rotto if you didn't get a #QuokkaSelfie? 😂

Tracey was in the unusual position of being both in Ireland for the marriage equality referendum in 2015 and in Australia during their campaign for the 2017 plebiscite (postal vote). His experience in Ireland meant he was well-placed to give advice and support to his Australian counterparts.

“I was heavily involved in the campaign in Ireland, out canvassing every night. I was involved in social media, I was running home each day to get back out on the doorsteps. In Australia I found ways to help, whether it was donating to Yes Equality here, or just talking to friends and those involved in the campaign and telling them what worked for me, how I explained it to people, how I engaged the opposition,” he says.

“I was very worried about Australia, based on what I was seeing and having gone through what had happened in Ireland and how hard we had to fight to get that Yes vote; I genuinely thought it was going to fail here.”

The plebicite passed in Australia, but Tracey continues to use social media to help break down stereotypes about the gay community.

“I’m a successful professional, with a higher-level education, who also has his own online business, and has a fantastic community of friends and family around him. That’s something that unfortunately is sometimes lacking in our role models in the LGBT community.

“I think people are starting to realise that if you’re gay it doesn’t necessarily mean it’s all rainbows and glitter and pride parades.”

His career goal now is to become a consultant in emergency and critical care veterinary medicine, and once he is granted his permanent residency in Australia, he plans to continue his studies through Murdoch University’s residency programme in Perth.

He hopes to bring back the skills and expertise he has gained in Perth back to Ireland in the future, especially if he gets his specialty qualification in emergency medecine.

“If i was to go from Australia, doing my job as I’m doing now, back to Ireland, it would be quite an adjustment,” Tracey says.

“I’d probably be one of the most qualified emergency vets in the country, because most vets in Ireland are general practice vets, a specialty unto itself. I’ve never done general practice, cows or anything like that. All I do is treat the sickest of the sick in emergency situations, and I love that.”

“I have Ireland to thank that I have an internationally recognised third level qualification. Yes, I paid blood, sweat, tears and registration fees for it, but I don’t have hundreds of thousands of dollars of debt, because that was paid for by the Irish Government. So the opportunity to bring something back to Ireland would be really worthwhile.”