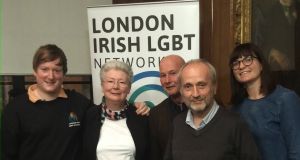 Joseph Healy with friends from the London Irish LGBT Network.

“For decades, indeed centuries, Irish LGBTQ people have been emigrating to Britain often because of intolerance and persecution at home in Ireland, ” says Joseph Healy, chair of the London Irish LGBT Network.

On November 1st, the organisation will jointly host a conference with Irish in Britain to celebrate the history and role of Irish LGBTQ people in Britain over the years, and discuss marriage equality in Northern Ireland.

Ahead of the conference, Joseph Healy, who moved from Dublin to London in 1984, and Orla Hillary, who arrived from Galway almost three decades later, share their experiences of leaving Ireland and finding a place they could be themselves in a new city.

I arrived in London homeless, as many young Irish arrived in those days, in 1984. I had left Dublin in the summer of 1983 and had lived for a few months in Liverpool, where unemployment was as bad as in the Ireland I had left. But it was unemployment or the economy which had led me to leave Dublin, it was my sexuality.

I was active in the early gay rights movement, as it was known then, and had been one of the editors of Ireland’s first publicly sold magazine, Hermes. I had also started a national poetry tour of LGBT poets called Voices from the Shadows”, which toured several Irish cities, and was denounced from the pulpit in two of them.

But I was growing increasingly unhappy in Ireland over the repression of LGBT people, the hidden and double lives which so many people lived, and the inability of someone like me who had come out when I was 20 to deal with a society where it was almost impossible to have a loving relationship with someone of my own gender.

I arrived in London to live in an LGBT squat at the Elephant and Castle, where there were many Irish squatters at the time. In fact, RTÉ were to make a documentary called Guests of another Nation set in the council estate where I squatted a few years later.

It was a time of anti-Irish prejudice, although nothing like as bad as it had been in the 70s. You would encounter anti-Irish comments and snide remarks both on the gay scene and off it. But the London of the 80s with its radical drag shows, discos and a myriad of bars really appealed to the 27-year-old me, and I soon settled into the gay scene.

I gained a council flat a couple of years later (it was much easier to get social housing in London then), and settled down to living an openly gay life.

In 2013 I was one of the founder members of the London Irish LGBT Network, where I tried for the first time since the 80s to reconnect with my Irish identity and the Irish community in London.

I moved from Galway in 2012 to London to do nursing at Middlesex University. I wasn’t really out before I moved to London; it just didn’t feel like was a very easy thing to say when I was at home, to family and friends. So it took a year of being in London before I built up the courage to start telling people at home that I was gay.

I joined Kingdom Kerry Gaels and met lots of other Irish people that way. I found my local, the Claddagh Ring, where I spent time meeting other people. I found it so much easier to be myself in London than I did in Ireland.

Even after coming out and going home I still felt like there was a stigma around people who are gay, which was quite hard for the first couple of years. I was getting those weird questions, like “Do you not ever think you’d meet a nice man and want to get married and have children?” I can still have that, I’d say, it doesn’t have to be with a man. You still just have to justify why you are the way you are. I don’t have to do that in London. I feel really happy here now; I wasn’t happy in Galway.

When I finished my nursing degree I went into a representation role in my student union. I was vice president of health and education, science and technology. I led the LGBT liberation strand, offering support for people who were LGBT but maybe hadn’t come out yet. I also set up a homeless soup kitchen on the university campus, and was involved in running campaigns for things like extra graduations, discounts on food, and more support for mental health services.

I now work as a nurse in an intensive care unit (ICU) unit in Whittington Hospital in north west London. I also do part time lecturing at the university, teaching basic life support skills.

My sister also lives in London, she is a trainee A&E consultant and she was the London Rose in 2015, so that also gave me lots of chances to meet other lovely Irish people. I play basketball for a local London basketball club.

I flew home for the marriage equality referendum in 2015. I was really delighted that it passed, but I was also quite disappointed to see that there were still a huge number who didn’t believe in LGBT marriage. Part of me wonders were there people I know who voted No, who pretend to be OK with it but are not?

Moving to London was the best decision I’ve ever made, because I have found who I really am, and I really enjoy life here.

For more information about the London Irish LGBT Network, see londonirishlgbt.wordpress.com. To book tickets to the conference, see eventbrite.com/e/lgbt-equality-ireland-past-and-present-tickets-50961329709