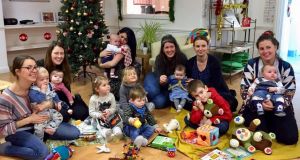 The Irish language can be an incredibly important way for many Irish people living abroad to connect to their heritage and culture, but the endeavour becomes more challenging when they have children. Irish emigrants and their kids immediately miss out on the what most Irish people at home take for granted: free, accessible Irish language tuition.

This is something James McDonald, who lives in London, is trying to change. A new Saturday school will soon open in London for parents who want their children to grow up learning the Irish language. Gaelscoil Sathairn will open its doors in January, ultimately catering for children of all ages to help them grow up bilingual.

This is not McDonald’s first foray into Irish language education. For almost two years, he has run the London Irish Playgroup. Once a month, Irish parents in the city and its surrounding areas bring their children to the London Irish Centre, where they play, listen to music and engage with each other as Gaeilge.

But as their children began to outgrow the playgroup, McDonald and the other parents realised they would need continued support to help their children to keep learning the language.

“We’ve since seen the need for a complimentary Saturday school that is immersive, so Irish is the main language spoken. This is to particularly benefit the bilingual children who otherwise wouldn’t be as likely to speak Irish if they’re only hearing it spoken at home,” McDonald explains.

“Ideally, the children will have an education in both of their languages, but Irish is not widely taught in English schools so the obvious solution is for us to start a Saturday school to support their ‘minority’ language and go from there.”

McDonald is also keen to dispel myths surrounding the learning of Irish - and other languages - in early childhood, particularly the idea that it could impact on their English language skills.

“The cognitive, social and academic benefits of bilingualism are well accepted these days thanks to lots of international research. The myths of speech delay and notions that it might confuse children have finally been rejected. In reality most people in the world grow up with more than one language, so monolinguals are really a minority that are missing out.

The fee for the classes has not yet been confirmed, but the goal is to make it affordable for all families. The group is in the process of applying for grants and other funding, to ensure cost will not be a barrier.

Parents interested in registering their children in the school, or who want to offer teaching services, funding or information about grants, can write to James McDonald at teaghlaigh.cngilondain@gmail.com . An open evening will be held at the South London Irish Centre on Friday, November 30th.