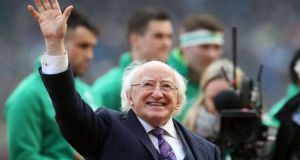 Three in four Irish people living overseas who took part in an Irish Times Abroad online poll would have voted for Michael D Higgins, had they been able to cast a ballot.

Around 13,000 members of the Irish Times Abroad Network, who had identified themselves as living outside Ireland, were invited to participate in a “virtual vote” on the Irish presidency and blasphemy this week, ahead of the election and referendum on October 26th. More than 1,000 respondents completed the survey.

Incumbent President Higgins was by far the most popular candidate, receiving 77 per cent of the first preference “votes”, deeming him “elected” on the first count.

Sinn Féin MEP Liadh Ní Riada received the second highest number of first preferences, with 8 per cent of the total, followed by entrepreneur and former Dragons’ Den panellist Peter Casey, with 6 per cent.

Mr Higgins was even more popular among young respondents, with 83 per cent of those in the 18-24, 25-32 and 35-44 age categories saying they would vote for him.

Ms Ní Riada’s popularity particularly increased among those aged 65+, with 13 per cent of people in that age category favouring her. She also polled higher among respondents in the US, at 11 per cent.

But her highest number of virtual votes came from those of Irish ancestry living abroad, with 23 per cent of those who identified as “Irish citizen by descent” saying they would vote for her.

Respondents living in Britain and Canada were more likely to be against the proposal, with 14 per cent saying they would vote No, compared to just 5 per cent of those living in Asia, and 8 per cent in the US.

Older respondents were also more likely to say they were against, with 15 per cent of the over-65s saying they would vote No.

Under Irish electoral law, Irish citizens are only allowed to vote for 18 months after leaving the country, provided they plan to return to Ireland within that timeframe. Those who are eligible must travel back to their home constituency to cast their ballot. Citizens living in Northern Ireland are also excluded.

The Government plans to hold a referendum on extending voting rights to Irish citizens overseas in presidential elections in May 2019. The proposed referendum will cover voting in Presidential elections only. It is not yet clear whether it will propose extending the vote to all Irish citizens living in the North and abroad, or limit it to Irish passport holders only, or those born in Ireland, perhaps with a time limit after emigrating.

The vast majority of survey respondents were in favour of extending voting rights in presidential elections to Irish citizens living outside the Republic. One in three agreed that all Irish citizens should have a vote without exception, while another one-third said it should be limited just to Irish-born citizens. One in five are in favour of extending the vote only to Irish-born people for a limited time after emigrating, for example 10 years. Just 12 per cent were not in favour of granting overseas citizens a vote.

Why did The Irish Times conduct this “virtual vote”, and how?

The President of Ireland “represents all the people of Ireland, both at home and abroad”, according to president.ie, yet Irish citizens residing outside the country have no say at the ballot box on who represents them.

Unlike more than 130 countries worldwide, Ireland has no system for citizens abroad to vote in either elections or referendums. Under the 1992 Electoral Act, Irish citizens retain their right to vote for just 18 months after moving abroad, as long as they intend to return to Ireland within that timeframe.

This week, around 13,000 members of the Irish Times Abroad Network - who are living abroad, and opted in to participate in polls - received an invitation by email to cast a “ballot” in our online virtual vote for the 10th President of Ireland, and in the referendum on blasphemy.

Each email contained a unique link to a “ballot paper” where they could rank the candidates in order of preference, as well as provide some basic information about themselves, including where they live, how long they have been abroad, their age and gender. They were also asked whether they would vote Yes to remove the offence of blasphemy from the Constitution, or No to retain it.

This ballot was completely anonymous, and not linked to their Abroad Network profile, so we do not know how each individual voted.

To prevent the system being “gamed” by supporters of a particular candidate or referendum position, the ballot link could only be used once. A multi-step sign-up and verification process meant the system could not be gamed by a bot.

If you would like to participate in future virtual votes, or just sign up to receive our weekly email digest, you can join the free Irish Times Abroad Network here.

Responses from people who indicated they were back living in Ireland again, or were of Irish descent, were removed, leaving a total of 1,049 valid virtual votes for the presidential election, and 1,107 for the blasphemy referendum.

The survey was carried out among self-selecting individuals. It is not a weighted survey and does not purport to accurately represent the wider Irish emigrant population. All results should be seen as indicative rather than definitive.

This project is a collaboration between the editorial and technology departments in The Irish Times, supported by the Google Digital News Initiative.

‘I felt safe in Korea. Returning home felt like a gamble’