Was Bram Stoker’s Dracula inspired by his own Irish family history?

Irish folklore could be the source, but his mother's stories may be more likely 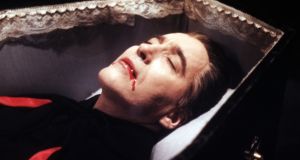 Writers write about what they know, so when we try to understand where Bram Stoker took his inspiration for Dracula, we look to his own life.

Stoker’s biographers have perhaps been a little too literal in their reading, putting his relationships with family, friends, professional and casual acquaintance under the microscope and given the author and his work a Freudian makeover. They contend that Dracula is about sublimated sexuality, and several associations are presented as evidence Stoker was gay or bi-sexual but chose to remain closeted: an early letter to openly-gay poet Walt Whitman; Stoker’s wife Florence Balcombe’s one-time attachment to Oscar Wilde; Stoker’s personal and professional association with actor Henry Irving, for whom he managed the Lyceum Theatre in London; his repudiation of Wilde when scandal broke.

Other biographers make the case that working as he did in the London theatre world, Stoker lived a double life: at home with his wife and son the respectable père de famille; at work, as manager of the Lyceum Theatre, he had a pass to the demi-monde. Stoker, they argue, experienced the excess and drew on the anxieties of his age: syphilis, fear of women’s sexuality, immigration from Eastern Europe and colonialism, are paraded as having provided inspiration for Dracula.

Stoker himself cited two published sources as inspiration for the vampire: Emily Gerard’s essay on Transylvanian Superstitions, and the Reverend Sabine Baring-Gould’s Book of Werewolves (1865).

He also made more oblique references to the macabre stories his mother told him in childhood when he was ill from a nervous system disorder, which kept him bedridden until the age of seven. “I was naturally thoughtful, and the leisure of long illness gave opportunity for many thoughts which were fruitful according to their kind in later years.”

Critics speculating on what these tales might have been, have naturally alighted on Irish folklore; the banshee and the cóiste bodhar (silent coach) harbingers of death; changelings and shape-shifters who criss-cross boundaries of the supernatural and the everyday world we inhabit. There is nothing twee about an Irish fairy, nothing good about the good folk. They are spiteful and malicious, in contention with humans, even for the prize of a soul.

Another popular meme for stories Stoker’s mother told him as a child is the tale of a cholera epidemic she witnessed in Sligo. A written account by Mrs Stoker prepared years after his’s own childhood, and now held in the Trinity archives, includes an account of how a traveller, suspected of carrying the illness, was accosted on the road outside the town and pushed while still alive into a shallow grave, using a long pole. None of the biographers seem to think this a rather strange tale for any parent to tell a young child, let alone one suffering from a “nervous illness”.

One strand of mother’s narrative that has not yet been properly investigated are the stories of Stoker’s own family history. The Stokers were the descendants of an English soldier, reputedly a quartermaster, who settled in Dublin. Bram’s grandfather, William Coates Stoker, was a “stay-maker” who made corsets. Ambitious for his sons, he ensured they were employed in clerical jobs, and astute enough to uphold their right by birth to be members of the city-guild (Tailors), to which he belonged.

On his mother’s side, (and remember these were his mother’s stories), Bram was related to the Blakes one of the “Tribes of Galway” who could trace their direct line to the 14th century.

Young Bram learned from his mother about the heroism of his great-uncle, “General” George Blake, who in 1798 commanded 600 rebels and fought alongside the French at the battle of Ballinamuck. The government army, led by Lord Cornwallis, outnumbered the combined Franco-Irish force five to one. French forces, overwhelmed by their larger, better equipped opponent, surrendered. Blake’s men were tenacious and held their position against successive cavalry charges.

At the close of battle, the number of Irish rebel captives was so great, General Cornwallis is reputed to have resorted to decimation, a form of military discipline in Ancient Rome. He compelled the rebels to “cast lots” to decide if they would live or die. The Freeman’s Journal reported that “Blake... requested [THAT]… the noose of the rope … for his execution [WAS]soaped, that it might shorten the time of dying. This, we hear, was granted, and he prepared it … with his own hand.”

Stoker’s O’Donnell heritage bound him into the warp and weft of Irish history. Only 12 generations separated young Bram Stoker from his ancestor Manus “the Magnificent” O’Donnell (who died in 1564), described by late Cambridge historian, Brendan Bradshaw as a “Renaissance prince”. In the 1530s Manus O’Donnell combined the Geraldine League, defied Henry VIII and led embassies to France and the Holy Roman Empire. He protected the Kildare heir, still a child, and shipped him overseas to be raised by the Duke of Mantua.

Bram’s maternal grandmother’s family, the O’Donnells of Newport, proprietors of Achill Island in the 18th and 19th centuries, shipped prize-wines and spirits from ports in France and the Iberian peninsula. They landed their wares off the Mayo coast to evade the “tide-waiters”, the armed Revenue men whose job it was to stop wreckers and smugglers.

In 1802 the O’Donnells imported a rarer cargo, a trunk that had been entrusted years earlier by one of the O’Donnell Wild Geese to a French abbé. The trunk when opened, held a wooden box or shrine with panels of silver and gold, elaborately worked and embedded with rock-crystal and pearls.

The jewelled box was opened to reveal a sacred text, the Psalter of St Columba (Columbkille of Iona). The manuscript is the earliest example of Irish writing. It’s one of Ireland’s greatest national treasures and is today held in the Royal Irish Academy in Dublin. The jewelled shrine, known as the Cumdach, can today be seen in the National Museum of Ireland on Kildare Street.

The Psalter had another name, the Cathach or “battler”, derived from its traditional use as a talisman before battle. The Cathach was carried above the heads of O’Donnell’s army, encircling them to symbolise they fought with God on their side.

The rediscovery of O’Donnell’s treasures had a dynastic significance for the family. The Newport O’Donnells were now recognised as the main bloodline in the family. It’s no coincidence that the family brought in a professional witness for the opening of the trunk, William Betham, genealogist and later Ulster King of Arms. The trunk’s contents provided material evidence for a line of descent that extended back 1,400 years.

The importance of these stories to young Bram Stoker was not that they defined degrees of separation, that connected him to St Columba, the Loch Ness Monster or other figures that Irish school-children learn in class even today. It’s these stories we could argue which provided Stoker’s creative stimulus, and supplied him with the ideas that he drew on for his greatest work.

Informed by his mother’s narratives, young Bram understood his ancestral family as protagonists in events for over 1,400 years; as saints, princes, war lords, pilgrims, wild geese, smugglers, rebels and generals. Stories that he heard as family lore carried more weight and fed the feverish imagination of the author as a child.

Writers are like magpies, they find inspiration in everyone around them, family, friends, acquaintance; street scenes observed; snatches of conversation overheard; all bundled in with their own more systematic research. Stoker’s recently published book, The Lost Journal of Bram Stoker: The Dublin Years edited by Elizabeth Miller and Dacre Stoker, illustrates his apprenticeship as a writer and his first attempts to find an authentic voice.

This is a first attempt to recover the family history narratives that fed Bram Stoker’s love of storytelling. Stoker’s heritage gave him access to a world of gothic imagination and connected him to a lineage of Irish adventurers who looked out from this island, and exerted great influence in continental Europe.

Fiona Fitzsimons is founder of Eneclann and genealogist at the Irish Family History Centre. irishfamilyhistorycentre.com