What I miss about Ireland? Sunset over Bantry Bay, brown bread and sharp Irish wit 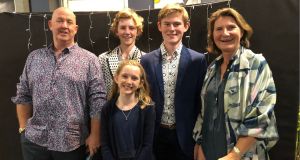 Pain specialist Dr Diarmuid McCoy with his wife Jane, who is from Midleton, Co Cork, Luke, 17 (right), Tim 15 and Cate 11

I qualified in medicine at UCC in 1991. After an internship, I decided to pursue a career in anaesthesia. My older brother and sister had taken this path and were very successful in it. Towards the end of senior registrar training I developed an interest in persistent pain. At that time the only structured training programme leading to an examination and fellowship was based at the Australia and New Zealand College of Anaesthetists (ANZCA). I was the first Irish doctor to be admitted as a fellow to the Faculty of Pain Medicine at ANZCA. My wife and I had planned to remain for one year, but stayed nearly two. I planned to return to Ireland, to Cork, and in preparation took up a position in the Watlon Centre for Neurology and Neurosurgery in Liverpool.

Have you done any training or studying there or anywhere else?

I pursued a fellowship in pain medicine at Flinders university medical centre in Adelaide, South Australia. This centre pioneered the use of morphine applied directly to the spine for the management of cancer pain. This resulted in the development of systems to deliver this and other medicine to the spine, and help manage severe pain in cancer.

Tell us about your career?

I actually wanted to specialise in the care of trauma and trauma anaesthesia. It was while I was a senior registrar in St Vincent’s University Hospital in Dublin that I developed an interest in pain medicine and the skills around it. At the time, the newly established Faculty of Pain medicine in Melbourne was the only place that offered a training programme and exam to qualify in pain medicine. After my time in Adelaide, I returned to Europe and took up a position in the Walton Centre for Neurology and Neurosurgery in Liverpool. At this centre of excellence I developed skills in neuromodulation and cordotomy. I had ambitions to return to my home university hospital in Cork, however an invitation to join an emerging pain unit came in 2003 and I moved to Geelong Victoria in 2004. Since then I have been involved in the development of the medical school at Deakin University and also as an examiner at the faculty of pain medicine for the past 10 years.

I work in public and private practice. This involves the assessment and management of patients with chronic or persistent pain. A small proportion of my practice involves cancer pain.

You specialise in pain management. What does that mean?

Pain, particularly persistent pain, is common. It affects about 20 per cent of the population, a greater number of people than cardiovascular disease, cancer and diabetes combined. This costs AUS$40 billion per year. The estimated cost for endometriosis is AUS$3.4 billion a year. Endometriosis is an often painful disorder in which tissue that normally lines the inside of the uterus grows outside it. Pain is a significant challenge to healthcare professionals and has a devastating effect on the sufferers and their families. My role is to assess, diagnose and help manage these patients. This can be with medication, involvement with allied health professionals, interventions and procedures, or a combination of these elements. The psycholsocial biomedical approach is considered the gold standard and in my practice it is this model that we adhere to. Currently we work with three psychologists, two physiotherapists and an occupational therapists nurse and support staff. We offer cognitive behavioural and mindfulness programmes in addition to procedures and spinal cord stimulation.

What effects can being in pain have for people?

Persistent or chronic pain can have a devastating effect on patients and their families. In addition to a loss in physical function and sleep disruption, loss of job and social interaction can cause significant depression even self-harm. All of these aspects have to be taken into consideration when treating pain.

Are you working towards stopping all pain? How?

I think it would be naive to try to eliminate pain and indeed, it might not be an ideal goal. It is reassuring that the appreciation of pain is spreading and we are frequently consulted by other specialities to advise on how it might be prevented or minimised.

The human condition means people want to tell their story and have their experience validated. Pain is a sensory and emotional experience that is difficult to articulate measure and treat. Like describing the taste of food or a colour, it is almost impossible to put into words what this very common phenomenon feels like. Many patients express distress when relating their pain journey.

You have three children. Do they think of themselves as Australian or Irish?

We've had one child born here in Australia and the other two, who have lived essentially all their lives here, consider themselves Australian - especially as they have represented Australia in international sailing. They do, however, have a deep connection with Ireland. They always look forward to visiting grandparents and of course meeting cousins in Dublin, Belfast and Cork.

The type of practice I have in Australia might difficult be to establish in Ireland as the funding models have significant differences. The entity of chronic pain medicine has progressed greatly in Ireland over the past 20 years. The Faculty of Pain Medicine in Dublin, I believe has incorporated some elements of the Australian Fellowship qualification into their exam process. The European Academy of Pain Medicine mirrors very closely the curriculum and exam process we have here. There is very high quality research being done in Ireland .

Do the Irish fit in well in Geelong?

The Irish community is not as large as Melbourne or Sydney, but there is an Irish club and St Patrick’s Day is celebrated every year. The Western district of Victoria was a popular destination for the Irish in 19th and early 20th centuries with many areas adopting Irish names. The landscape is certainly very reminiscent of the west coast of Ireland.

Geelong is by the sea and has a Mediterranean climate with four distinct seasons. Cool climate red wines are well regarded and high-quality olive oil is produced. Originally an industrial hub many of those industries have been replaced by hi-tech research and development enterprises.

Geelong has attracted a number of Irish doctors with several now employed in the fields of anaesthesia, emergency medicine, intensive care and surgery. I meet with other Irish doctors from across Victoria in the course of my work.

Geelong is about the same size as Cork city, 70km south west of Melbourne. Property prices in the major cities have softened somewhat in the last 12 months, however property prices in Geelong are still rising. Being just one hour from Melbourne with good rail and road services (and a regional airport) it is seen as an attractive place to live even if you are working in Melbourne. The university attracts about 25,000 students across three campuses. It is a growing centre for international sporting events such as UCI cycling, world sailing regattas and of course Aussie rules football. Geelong is considered a gateway to the famous Great Ocean Road and the surf coast beaches of Jan Juc and Bells. It is an attractive place to live and work

The Roscommon man who became a sumo wrestler in Japan
3

How to trace your Irish family history: a step-by-step guide
5