Irish nature feels so novel after returning from Australia

The smell of the earth, the damp leaves and the rain has made my heart sing 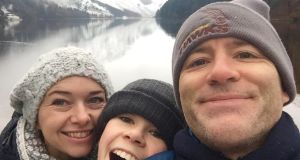 Catherine Monaghan with her family at Glendalough in Co Wicklow this winter.

I have spent half of my life in Australia. At 13, a pale, short-haired Irish girl lost in a sea of golden, athletic, confident youth, I hated it with a passion. Adolescence is a difficult time to move country. By 14 though, I was happy again. I had acclimatised and adapted as we humans inevitably do. At 17 I left, with a broken heart and promises to write letters and come back soon.

Returning again in my 20s, I loved it. Full of enthusiasm and with the sense that anything was possible, I settled in to university life, work, and relationships without giving too much thought to what I had left behind. My family had strong connections in Australia so they visited me, and our tight-knit Irish friends from our previous stay in Perth felt like family too.

The sudden death of my brother in Ireland during this stint was a jarring reminder of just how far away I was, and how much I was missing. The two-day journey to get home to my family, and the goodbyes when it was time to leave again, were the stuff of my worst dreams. On returning to my life in Perth I felt the absence of a community who knew him. I felt so anonymous.

By the time of my third stint, I was 30-something, married, and a mother of one. Leaving Ireland was not so easy this time. Most significantly, we were taking a beloved first grandchild to the far end of the world. The farewells were excruciatingly painful. The care-free optimism we had set off with in our 20s was a little dimmed. We were parents now, and we had a house still unsold after several months on the market due to the downturn. We weren’t leaving Ireland because we were unhappy, but because it made sense practically, financially.

Nonetheless, we were ok. The house sold. We settled in to life in Perth again. We got used to travelling over and back as often as we could for holidays. We talked and Skyped and ensured our son grew up with close ties to his extended family, despite the distance that separated us.

We stayed for ten years. We were happy, but… There was always the “but”. Something intangible was missing. I tried to ignore a niggling ache in my heart. Our lives were punctuated by hellos and goodbyes. Events were noted for whether they were before or after so-and-so’s visit, or our last trip home.

We loved Australia. We loved the sunshine, the beaches, the bush, the abundance of beautiful parks. It is a country of immense and diverse beauty. But, even though a part of me will always belong there and it is a part of me, it wasn’t our country. It wasn’t our landscape; we were visitors.

After several years of thinking about it, talking about it, swinging from one side of the debate to the other, we decided to leave.

We returned to Ireland toward the end of a summer. We had had so much summer over the past ten years that I was desperate for autumn, winter, spring, seasons. I ached for these seasons during my years in Australia.

Of course there are advantages to having nine months of guaranteed sunshine and a short winter; you can plan a picnic or a day at the beach and you can be 100 per cent certain that when you put away your winter clothes you won’t have to go rummaging for a warm sweatshirt a month later. The Australian seasons are beautiful in their own way, but I missed that cycle that my people live through year after year, generation after generation.

Soon after arriving back we made some wonderful new friends who reintroduced us to so many awesome places. I might be biased, but I think we live in one of the most beautiful parts of Ireland. We’re on the coast and we have mountains, rivers, woodlands, and access to many beautiful gardens.

We were in our element. We could go out walking at any time of the day once we had warm clothing and good boots. In the Australian summer it was too hot for that between 8am and 6pm. We actually seem to spend more time outdoors here than we did in Australia.

The familiarity of the outdoors here, the smell of the earth, the damp leaves, the rain, the colours of autumn, and even the naked beauty of winter have made my heart sing. At times when I’ve felt overwhelmed by the enormity of this hemispheric move we’ve made, lonely for my Aussie friends and unsure of where we would end up, the woods, even when wet and cold, have offered a singular solace.

And now we have moved to a house surrounded by trees and bushes and garden. There are windows everywhere so even when we’re not outside it feels like the garden is part of the house. I’ve yet to put curtains or blinds on the windows, so we’re woken up by sunrise and the dawn chorus.

I sit by the same window to write each morning, noting the changes in the trees outside. They’ve progressed from the sparse beauty of winter when we first moved in through a delicate bloom in spring and on to the heavy, verdant ripeness of summer. Autumn, my favourite time of year, was breathtaking. I have a new appreciation for these seasonal changes and the trees of my childhood, having missed them for so long.

And we have so many birds - robins, wrens, thrushes, great tits, blue tits, goldfinches, bullfinches. Throughout last spring and summer we watched, mesmerised, as they gathered food for their young and introduced them to the wider world of the garden and surrounding trees.

One night we were entertained by a thrush trying to crack a snail’s shell on the frame of our hammock. Another day we watched a family of young blackbirds trying to gather worms in the garden as their mother watched on.

Now, in winter, we struggle to tear ourselves away from the kitchen window where we have a perfect view of our feathered friends feasting on the nuts and seeds we hang in our apple tree. Soon, there will be new life in the garden as little ones hatch and the greenery returns, the reassuring cycle bringing another generation of beauty into our lives.

It all feels so novel after Australia - such a different landscape with different wildlife. It is all so new, but at the same time it feels like home in the most profound way. It occurred to me soon after we arrived back in Ireland, to the town I grew up in, that not only do I belong here, but that this place belongs to me.