‘An instinct to survive surged. We grabbed our daughter and ran’ 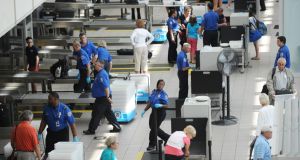 The first thought that burst into my head and thundered across my chest when a stampede of screaming people ran towards me at Orlando airport on Saturday was: “there’s a shooter”.

A split second of confusion, of not comprehending, was followed instantly by panic. An instinct to survive surged in us. We grabbed our daughter and said the word everyone was shouting at each other: “run”.

As we ran through the airport doors, hoards of people streamed out behind us. A siren blared, making its way to where we stood. Which direction should we run? Where would we be safe if a gunman followed us? How would we escape?

My head was screaming and my heart was pounding with fear. I held my daughter and husband close, shaking, scared, trying to stay calm. Nearby, people stood with their heads swivelling for signs of safety. A woman walked by in tears, petrified.

Police screeched to a halt about five metres from where we stood and dashed inside. Confusion was everywhere. Information was nowhere. Inside the terminal was chaos.

When people run at you in an airport or any public place in America, screaming, you run. You assume it’s an active shooter. The day before, six people were shot to death in Aurora, Illinois. It is so commonplace, an entire culture has been conditioned for it.

When we eventually made our way back into the building, law enforcement officials seemed to come from every direction. A woman stood by a wall, weeping into the phone. The atmosphere was shock, fear and terror. Nobody knew what was going on.

We stood and waited for information in a huge crowd of people. Rumours flew from mouth to ear and spread through the gathered throng of frightened passengers. My daughter kept repeating the question: “what’s happening?” At one point, she got upset and told me she was afraid a man was going to hurt her with a gun.

My kid knows there are guns in the US, where she has spent most of her life. It’s a discussion we’ve reluctantly had to have with her. At the age of three, she had to do active shooter drills in school in New York. The teachers lead the kids into the bathroom to hide from the bad man. Some will give them lollipops to keep them quiet. It’s practice for the possibility.

Guns and gun violence have become an American trademark. Mass shootings are now so woven into the fabric of its society, the country has lost sight of what it would be like to live without this constant threat.

The incident at Orlando Airport has since been reported by police and airport officials as a “security breach”. There was no active shooter. A man had attempted to cross a security checkpoint, and as police went to arrest him, he reached for his pocket and someone shouted that he had a gun, sparking the panic.

What has not been reported is the extent of the abject terror that struck everyone who felt like they were fleeing for their lives.

As we stood waiting for security lines to reopen, a woman told me she had been present for the incident. She had just walked through the metal detector when a commotion broke out and security officers shouted at everyone to run. And they did. In every direction.

A security officer told me they thought it was an active shooter, but then realised he had a knife. Passengers on the scene told me the man had a gun. Others said it was a knife. The chaos and confusion will likely disappear into the backburners of minds so accustomed to the presence of gun violence, it will become just a thing that happened at the airport.

Nothing about what happened was normal. That there was no active shooter means we were extremely lucky. Is this what passes for luck in America?

The United States is being traumatised by guns. What I saw on the faces of people around me was a mixture of fear, confusion and terror. But underscoring everything was a sense of “this is our normal”.

The ease with which business as usual resumed was disturbing. When the perpetrator was led out by police, the crowd cheered, as if this was a circus and the bad guy was going to get his comeuppance. It made me sick to my stomach.

Having spent an abundance of time while living in New York attempting to understand American love of guns and the refusal to accept the damage it’s doing, I have reached the conclusion that nothing is going to stop gun violence in the US. There is no magic number of human lives that need to be lost upon which sweeping reforms will occur.

The only hope is for future generations, those who are growing up traumatised by mass shootings, to gravitate towards politics and policy and effect change.

Until then, the pain will continue.

As hundreds of frightened people ran towards me and my family, I did not have “thoughts and prayers”. I had a fear in my heart that my daughter, my husband, and me, would be killed by a gun. Because this is what can and does happen here. This is the abnormal reality of American life.

The US calls itself the land of the free. This is a myth. It is a false narrative built upon another myth, American exceptionalism. Real freedom is the safety to live your life without fear of being shot dead in your school, your job, a building, an airport, a street, a shop.

Until that happens, the US will remain captive, a hostage of its own doing. Free from nothing, suffocating in trauma.

Lisa Tierney-Keogh returned to live in Ireland from New York last year. She is Associate Playwright at the Abbey Theatre and co-host of the Irish Stand podcast. She tweets @lisatk.