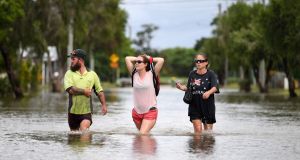 Days of torrential rain in north Quennsland sent torrents of water down the Ross River and into the city of Townsland, swamping roads, yards and homes. Photograph: Dan Peled/EPA

James Parnell’s series for Irish Times Abroad about bringing his family back to live in Ireland after 16 years in Australia was hugely popular among our readers in 2017. He returns today to share his advice on getting through the tough times: “If I was to give one piece of advice to people worried about being stuck or afraid to make big changes, I would say: move. Then keep moving. Don’t settle.”

January was the hottest month ever in Australia. A record-breaking heatwave led to widespread bushfires that are still burning in Tasmania, and epic flooding in Queensland (Tom Foley from Co Limerick told us how he risked croc and snake infested waters and rowed through rapids on flooded streets in a canoe to rescue his kitten as floods rose around his home in Townsville, north Queensland last weekend). “This is weather drama of Biblical proportions,” writes Kelly Shaw, who lives in Wagga Wagga in New South Wales. How can leaders in Australia still deny climate change?

As Brexit draws ever closer, more and more stories about its impact on the Irish in Britain are featuring in the Abroad section. Our most-read story this week (and so far this year, in fact) came from Margaret Donnellan, who has handed in her notice at her job in London, to move back to Ireland. “Nobody seems surprised. Brexit is looming around the corner. Why would I stay?” she writes. We’re expecting to hear more of these stores over the coming weeks and months.

Access to social welfare payments for Irish citizens living in the UK, and UK citizens in Ireland, will be “guaranteed” after Brexit under a new legally binding agreement signed this week, which will be a relief to the many thousands of pensioners and other Irish receiving benefits in Britain.

The long-promised referendum to extend voting rights in presidential elections to Irish citizens living outside the State will take place in the autumn, rather than May as originally planned; Brexit has also impacted on that decision too.

Why has the Irish passport suddenly become so popular? Sorcha Pollak dives into the data and finds that Brexit is not the only factor in the dramatic rise in demand; and if you’re looking for a good read on the Irish diaspora, a new book explores the complex and fascinating history of the Irish in Australia.