How to settle back into life in Ireland? Don’t ‘settle’

Maybe the best way to move back to anywhere is to keep moving forward? 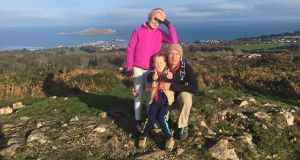 James Parnell and his family moved back to Ireland in 2016 after 16 years living in Sydney.

I briskly dry myself by the car after an ocean swim. OK, OK it’s a dip. I’ve been told it’s not the “ocean”, it’s the “sea”. But I like how “ocean” rolls off the tongue. When I say it I believe I’m in an exotic warm place. So I’ll stick with it.

A man approaches and asks, in a Dublin accent, “Is the water warm?”

I tell him it depends. “What are you comparing it to?”

Despite my best efforts, I’m still comparing it to Sydney’s Pacific.

Comparison is the death of happiness.

At the height of summer, Dublin’s grey water reaches 15 °C, just shy of the coldest winter waves rolling onto that stretch of Bondi sand that appears sometimes in my dreams.

It turns out the man lives in Seattle. He is 22 years away, and still thinking about coming home. As our conversation develops, it becomes clear these thoughts usually arise while he’s on holidays in Ireland; the most dangerous time for such rash decisions.

That said, our family’s own rash decision to move home after 16 years in Australia also came during such a visit, the culmination of months mulling it over.

This man is a local, and I suggest that maybe he’s not really truly considering it, that maybe he just thinks about it sometimes. I call it Emigrants Ache. In his Canadian-Irish community, he tells me, they call it The Question: “Would you ever go back?”

He asks if I’m glad I returned. The pause lingers. If it’s not an immediate yes, then is it a no?

In March last year, after our second winter back in Ireland which felt like the longest I’d ever endured, I had to get out for some sunshine and my own mental wellbeing.

That’s not for one minute to suggest I’m not happy, nor that our move back from Australia has been a bad one. Amazing things have happened, and continue to. Amazing people have come into my life. I put most of this down to the opposite of settling: not settling.

If I was to give one piece of advice to people worried about being stuck or afraid to make big changes, I would say: move. Then keep moving. Don’t settle.

Here’s what not settling has done for me in the past couple of years since returning:

I created my own business in corporate wellbeing, performance and innovation. I’ve personally coached or trained more than 100 people, within companies and individually. I’ve continuously experimented with new services and ideas. I’d never written so much as a diary before, now I get the chance to write for respected publications. I still have to try to convince myself - whether true or not - that “I’m a writer” so that I will write something, anything, whether it is published or not. I’m not a good writer, but I’ll improve by doing it, and it helps my mental wellbeing. That’s enough for now.

I’ve applied for and completed a Government business mentorship programme to help grow my business. I’ve completed a diploma in personal and business coaching. I even dined in the Australian ambassador’s house at his first official function (long story!).

I’ve contributed to a book about to be published. I’ve been interviewed by radio stations about wellbeing and being a returning emigrant. I’ve co-founded another company through which I’ve met the most amazing and diverse group of people, most of whom are completely different to me.

Each one of these things has stretched my mind, my heart and soul, and raised my level of consciousness.

I’m probably fitter, certainly stronger than I’ve ever been. I’m blowing my own trumpet, but you know what? Sometimes that’s not a bad thing to do.

If this inspires one person to try something they fear, then job done. Give yourself a pat on the back, enjoy what you achieve, or who you help, even privately. Then harness the confidence and move on to help someone new.

There have been days that have challenged me. Sometimes those days beat me. But most times, I feel I win. Always, my character grows. Two steps forward, one step back over a long time will bring you to places you never thought possible.

This is just on the personal and professional front. On the family side of life, we’re planning an epic caravan trip around Europe. It’s too early to say whether it will definitely happen. But the tow-bar is on the car and we’ve just bought our caravan.

Like riding a bike, sometimes moving quickly is the best way to keep your balance. I feel that way sometimes. Stay still and I might fall over. Sure, I slow down to take care of myself sometimes, and today is one such day as I’m rugged up with a man-flu. I try not to overdo it.

But I always like to have a goal to move towards. Without one, I feel I might be taking a backward step.

Not settling is my way of settling. Maybe the best way to move back to anywhere is to keep moving forward?

James Parnell is founder of ANewDawninIreland.com, a coaching programme for returning emigrants or those coming to Ireland for the first time.