'Hottest month ever in Australia has brought disaster of Biblical proportions'

Tasmania is burning, Queensland is flooded. How can leaders still deny climate change? 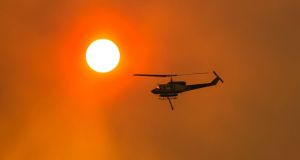 Water bombing helicopters have been regularly deployed in recent weeks in an attempt to put out bushfires in Tasmania. Photograph: Heath Holden/Getty Images

The calendar finally ticked over into February last week, officially ending the hottest January Australia has ever seen. This is a sobering fact, given that this is a country as used to heat as Ireland is to rain. But the heat is still agonisingly pervasive, and according to meteorologists’ predictions, it does not appear to letting up, either for this summer or beyond into the future.

Most of New South Wales, which includes a large portion of Australia’s food belt where I live, has been in severe drought for the better part of six months. The Murray-Darling River has been decimated, its shores littered with rotting, stinking Murray cod, the onetime-jewel in the fisherman’s crown.

Tasmania - a place once considered somewhat immune to the climate change issues facing the scorching mainland - is still facing the tail end of catastrophic bushfires. And at the Top End, severe flooding has struck Townsville in the past week, forcing many to evacuate.

This is weather drama of Biblical proportions. Locally, in Wagga Wagga, even the city’s treasured lake has become slick with blue-green algae, cruelly rendering it a useless resource just when the local population needs it the most.

I emigrated to regional Australia just over 10 years ago, when Australia was entrenched in yet another heatwave. I remarked to my husband at the time that we had gone from 40 shades of green to 40 shades of brown. The temperatures in the Aussie bush in the middle of summer were so unrelenting, so dramatic, especially in contrast to the cool, damp Irish summer that we’d grown accustomed to, that I thought I would go mad.

It was a form of weather-induced, almost-Hitchcockian claustrophobia: there was no cure, only treatment, which came in the form of a cold shower or a dip in a pool. This was no beachy, seaside, Home and Away Australia. This was a desiccated, leather-tough, almost hostile landscape, home to brown snakes and camouflaged kangaroos.

This, my first official summer spent in the antipodes, was also the summer of the Black Saturday bushfires. Over the course of days, the fires destroyed 2,029 homes in the state of Victoria. This is roughly equivalent of the entire town of Bantry, Co Cork disappearing. More than 173 people lost their lives during the fires, the current population of Quilty, Co Clare. Homes and lives were completely destroyed, in addition to the deaths of countless native animals, beloved pets and livestock.

Although I lived a couple of hundred kilometres north of the areas afflicted, an orange apocalyptic haze consumed the sky for days. I again questioned if we had made the right decision in choosing to return to my husband’s native country. I would never again complain about rain; ten years on, and this is still true.

Almost every day, there seems to be some new weather-related event occurring here. It’s become a major feature of the nightly news reels, during which I often hold my breath as I wait for the death count, see the footage of people’s entire lives being ravaged by fire or flood.

Part of me selfishly longs for the mediocrity and predictability of the Irish weather reports, which, even when wrong, still always contain an element of truth. Prior to life in Australia, I had never seen a temperature map covered in the blood-red crimson of 40-plus degrees Celsius.

While the 10th anniversary of those catastrophic Black Saturday bushfires is this week, as evidenced by the examples above, one has to wonder if Australia is really that much further along in dealing with the realities and consequences of climate change. Record-breaking occurrences have almost become a part of the way of life, part of the national identity, in keeping with the endearing, tough “we just get on with it” nature of many Australians.

Government officials seem to take the US approach when there is yet-another mass shooting: they offer condolences, prayers and maybe even throw around band-aid solution money to assuage things, but little else. Policy never seems to enter the discussion; perhaps it has been deemed insensitive to discuss when people have just lost everything.

Alongside the issues related to refugees and asylum seekers, climate change, and how best to deal with it, continues to be a contentious and divisive issue in this country’s politics, often turning into a country versus city debate. While not a country boy, former prime minister Tony Abbott, notorious for being a climate-change denier, said as recently as 2017 that implementing a climate change policy was the equivalent of primitive people sacrificing goats to appease the volcano gods.

The Department of Environment and Energy and other official government websites on this topic proudly boast that Australia is on track to comply with a significant reduction in emissions as per the Kyoto Protocol and the Paris Agreement.

But one has to wonder, given the frequency and the scale of these “once in a lifetime” weather happenings, if this will be enough.

In the meantime, all I can do is take another dip in the pool.

Kelly Shaw is a freelance writer based in Wagga Wagga, country New South Wales, where she is an adjunct lecturer in writing at Charles Sturt University. A Boston-born Irish citizen, she lived, worked and traveled in Ireland for many years before settling in Australia. She is currently at work on a Wagga-based novel. Fullstopwithkelshaw.com.au