The Irishman who lived through rebellions, plague and fall of the Qing Dynasty 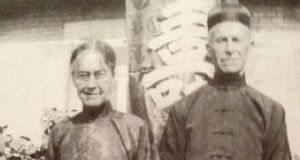 Rev Frederick O’Neill and his wife Mrs Annie O’Neill (nee Wilson) outside their home in Faku in China in the 1930s. Photograph: Marion Young

“At times I gave gifts to local rulers or kings, over and above what I paid to their sons who travelled with me. Despite this, they took me and my companions prisoner, and very much wanted to kill me, but the time had not yet come. They stole everything they found in our possession, and they bound me in iron.”

The life of a missionary is never easy. The timelessness of the challenges they face is encapsulated in the quote above.

As much as it might read like an extract from a 19th century missionary’s account from some far flung corner of the world they are in fact the words of St Patrick, writing about the tribulations he faced attempting to convert the Irish in the 5th century. Generally isolated, frequently ill, usually perceived as a soft target by opportune thieves and a danger to social cohesion by those in power they nevertheless persevere in service to their religions and their god or gods. Missionaries are exceptional individuals and usually gifted (or cursed) with a dogged determination. One such evangelist whose fortitude was frequently tested was Rev Frederick O’Neill.

An Irishman was born in Belfast in 1870 to a comfortably middleclass Presbyterian family. He attended an elite local school, the Royal Hibernian Academical Institution, before graduating with a BA and a MA in Mental and Moral Science from Queen’s University Belfast in 1893. He soon felt he was being called to serve God and undertook a further degree in theology at Union Theological College before he left these shores at the age of 27 as a newly ordained minister. His destination was The Imperial Realm of the Great Qing, better known in the west as the Empire of China.

He got off to quite an inauspicious start when the ship he was travelling aboard was struck by a hurricane off the coast of Hong Kong: “It was so severe that all life boats were lost, some cabins wrecked and the ships badly damaged … My cabin was at one time several inches deep in water, trunks boots and collars were floating about merrily”.

Eventually, after completing a journey of more 18,000km he would arrive in the north eastern most region of China, a territory which incorporates the modern provinces of Heilongjiang, Jilin, and Liaoning. A vast but sparsely populated area it was the ancestral homeland of the ruling Qing dynasty and an object of desire for the expansionist Russian and Japanese empires.

After spending six months in the city of Mukden (now known as Shenyang) learning Mandarin and gaining an appreciation of the local customs and practices, he made his way to the market town of Faku, 161km north of Mukden. His new district was more than 33669.845 square kilometres and he was the only Presbyterian minister among a population of more than 500,000 people. It was here he would spend most of the next 45 years.

Not long after his arrival in the town the Boxer Rebellion broke out. Anti-Western sentiment was running high and the secret Society of the Righteous and Harmonious Fists, a large group of mostly peasant farmers and workers, were determined to drive out or kill foreigners responsible for importing opium and alien religions to China. They received the support of the imperial administration and attacks began on Christian churches and foreign hospitals and schools. Thousands of Chinese converts were slain and churches, hospitals and schools burnt down.

European religious leaders were high priority targets and Rev O’Neill was forced to flee to Russian controlled Vladivostok. The journey of several weeks, while under constant fire. Many members of the party he travelled with were killed during the escape and had to be buried along the roadside.

O’Neill held Japan and the West responsible for the rebellion. Decades of gun-boat diplomacy that had allowed foreign powers to impose unequal treaties upon the Qing administration were to blame for the hostility felt by the disaffected Chinese: “Without a strong army or navy, with no friend except right on their side, what could the heathen Empire do but submit to the mailed fist of Christian Europe? They were very angry”.

In the wake of the uprising he returned to Faku and rebuilt his church. He soon added a primary school for boys, a hospital and a school for girls; the latter a major concession in a region where girls generally didn’t receive an education.

Yet his trials had only just begun. Over the next four decades he would witness the Russian-Japanese War of 1905, the pneumonic plague of 1911 that killed 60,000 people, the fall of the Qing Dynasty, would act as chaplain to the Chinese Labour Corps on the Western front in the first World War and be interned by the Japanese Army during their invasion of China in the 1930s. His fortitude would be certainly be tested.

To learn more about the remarkable story of Rev O’Neill join us at EPIC The Irish Emigration Museum on August 22nd for “War, Plague, Occupation & Evangelism”, a talk by his biographer and grandson Mark O’Neill as part of the Heritage Week festival. For more details click here.