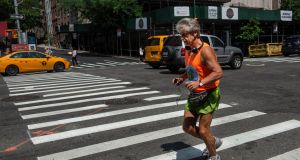 The Black Sheep pub in Midtown was crowded as usual on a recent Friday night, but there was a sense of urgency in the air. Regulars periodically put down their beers to go and wish good luck to the bar’s owner, Tom McGrath, (69), who sat wearing a tracksuit and drinking coffee from a mug.

As McGrath shook their hands, he sometimes paused to massage his legs. “I never like sitting when I’m preparing for a run,” he said. “Got to keep the blood moving.” Posters around the bar illustrated with shamrocks, Irish flags and a photograph of him in jogging shorts indicated the cause of his well-wishers: He was flying to Ireland the next day to participate in a marathon, but it wasn’t going to be any ordinary run.

McGrath has been a publican in New York for 50 years. He has also been a star of the extreme long distance marathon sport known as ultra running, jogging alone for days over hundreds of kilometres, testing the very limits of human endurance. In 1977, as a 27-year-old bartender, he broke a world record when he ran across America in 53 days, and he was a torch bearer for the 1996 Summer Olympics. He has been called the “Irish Forrest Gump. ” His four-day solo run through Ireland and Northern Ireland would last 161km (100 miles), starting in Belfast and continuing through the countryside of Burren, Dundalk and Drogheda, before ending at a football stadium in Dublin where crowds would cheer him during a halftime show.

But the spectacle would commemorate something else: For McGrath, this would be the final long-distance run. “I’m running against age,” he said. “My body has changed. I never thought it would happen, but it did, and I want to stop while I’m still ahead. With God’s help, I’m going to walk over that finish line if I have to.” It has taken McGrath a long time to reach this finish line. He grew up on a farm in Northern Ireland, he has owned 10 pubs in New York, and he has run more than 321,869km (200,000 miles). He struggled with alcoholism for decades, very nearly dying, and he found salvation on asphalt.

At one point, McGrath slipped away to the pub’s second floor, which is lined with jerseys and news clippings from his running years, and he retrieved a faded batonlike object: his Olympic torch. “They let me keep it,” he said. “When I called them to ask how to light it, they told me: ‘You can’t do that. It’s sacred. You can keep it, but if you light it, we’ll come back for it.’”

McGrath grew up without electricity or running water on a farm in Co Fermanagh. He had 10 siblings, and their breakfast typically consisted of a salted potato with a glass of milk to dunk it in. He left home when he was 11 to join a clerical brotherhood. “Growing up in the kind of poverty I did,” he said, “that’s how my discipline as a runner all started.”

But he was passionate about sports, and in 1969 he enlisted in a summer program to play Gaelic football for Irish amateur leagues the Bronx. “When I landed at JFK, everyone seemed in a hurry to go nowhere,” he said. “I’d never seen bigger people in my life. The cars were huge, and I’d never seen a highway.” He resolved to settle in New York, and in 1974 he started running a bar in Queens.

One summer night, his friends didn’t show up for a football match at their local park so he started jogging around the field, and he didn’t stop until three hours later. “That’s the moment I got the bug,” he said. “They call it the ‘runner’s high.’”

McGrath became fanatical about running, and he started jogging seven hours a day. When he discovered that a world record existed for crossing America by foot, he was inspired to beat it. At the time, Ireland was in the midst of the unrest known as “the Troubles”, so when his Irish friends and bar patrons learned that the record was held by an Englishman, they encouraged McGrath to break it as a matter of patriotic principle. That August, McGrath jogged across the George Washington Bridge, trailed by a Winnebago carrying a three-person support team that included his wife, whom he had married the day before. He arrived in San Francisco 53 days later, breaking the record by 12 hours.

At the finish line, a reporter asked him if he’d ever felt like quitting, and McGrath replied, “Every five minutes.” When he returned to New York, he was a local hero. His feats accumulated: In 1988, he ran a 1,609km (1,000 mile) marathon in Flushing Meadows Corona Park over 16 days, and a year later, he circled the Central Park Reservoir 740 times, sleeping at night in a trailer beside the track.

But upon finishing these runs, McGrath began celebrating to excess. It became common for him to consume 15 pints of beer in one sitting and to finish his own bar’s vodka supply. He started drinking gin from a mug with a Lipton tea bag on its side, and he sometimes woke up on the floor of his pub at 5 o’clock in the morning.

“When I wasn’t running, I was drinking, and when I wasn’t drinking, I was running,” he said. “My brain was swimming in alcohol. My mind was a fog.” McGrath swerved between periods of athletic discipline and spiralling episodes of alcohol abuse for years. In 2010, his wife and daughter found him nodding off, his eyes were yellowing over, and he was eventually arrested for driving while intoxicated. Doctors told him he was at imminent risk of liver failure.

The diagnosis rattled McGrath, and he embraced sobriety, immersing himself into long-distance marathon running with ardor. He said he has been sober for nearly a decade now, and his recovery has become central to his identity as an athlete. In 2016, he published an autobiography, “The Black Sheep: The Fittest/Unfittest Bar Owner in New York,” and his marathons have benefited charities aiding those who struggle with addiction. McGrath still wrestles with those years. “If I could turn back my clock, I would change a lot of things,” he said. A short documentary about him features a scene in which he arranges a meeting with his daughter, Kelli. Seated opposite her on a couch, McGrath thanks her for visiting him. “I want to apologise to you,” he says. “I hurt you and Mom, and I’m so sorry.” He asks, “Can you give me a hug to that effect?” McGrath leans across the couch to embrace her.

He lives with his wife, Mena, not far from his pub in Midtown East. He started running the Black Sheep in 1998. The contradictions of a recovering alcoholic tending a bar aren’t lost on him. “I realise I sell alcohol for a living,” he said. “I do my best to make sure people drink in moderation.”

“I say hello to the bottle every day when I go to work,” he added. “But I never forget it is my enemy and that it nearly killed me.” On the day of his flight to Ireland, McGrath took one of his routine jogs in Midtown. He bounded down Third Avenue wearing an orange T-shirt, neon green track shorts and a bum bag. Bus drivers waved to him as he ran against traffic, and he stopped to stretch in phone booths.

On 14th Street, he stepped into an old church. He dipped his fingers into holy water and he knelt beside a statue of the Virgin Mary to pray. He said he visited this church every time he took his morning jog. Outside, he began loping back uptown to finish packing his luggage at the Black Sheep.

“I was asking God for the strength to complete this last run,” he said. “He’s known about it for the last six months now.” Last Saturday, from the hills of Drogheda in Ireland, McGrath reported over a phone call that God was looking out for his right leg, which is prone to injury, and that cars were honking encouragement to him as he jogged along country roads. The next day, he would successfully reach the football stadium, and the crowd would roar as he ran onto the pitch.

But at the moment, the station wagon trailing behind him with food and water had unexpectedly faltered. “The car broke down before me,” he said. “It broke down. I didn’t.” – NYT