The view from the Irish pub, Washington DC: ‘Ireland is more progressive than the US’ 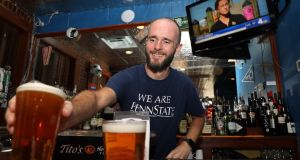 Exile’s barman Donagh Gilhooly: “The warmth and welcome of an Irish bar, but without being too heavily themed.” Photograph: Marty Katz/washingtonphotographer.com

Located in downtown Washington DC, the entrance to Exiles can be easy to miss. The bar is one of the many pubs and eateries along the so-called U street corridor, a trendy district in the US capital.

Exiles is not a typical Irish pub. Inside there are few signs of the Irish-themed paraphernalia beloved of Irish bars across the globe.

Subtle reminders of Ireland are there if you look hard enough – the Jameson whiskey behind the bar and the inevitable Guinness on tap.

But the dominant atmosphere is one of laidback warmth, as customers watch the baseball match on the TV in the corner, and order barbequed food from the extensive bar menu.

In a country that invented the shillelagh-and-shamrock brand of Irish identity, this is a pub that does not flaunt its Irishness.

“What we wanted to do was to keep the best of what Irish pubs have to offer,” explains Donagh Gilhooly, who renovated the property in 2016 with two other Irish colleagues. “The warmth and welcome of an Irish bar, but without being too heavily themed.”

The bar’s name reflects the kind of wide customer base the establishment attracts, in a city that has one of the most international communities in the country.

While Exiles has echoes of James Joyce’s eponymous play, Donagh says that it also stems from the Rolling Stones album, Exile on Main Street. And it captures not only one of the recurring themes of Irish literature, but the particular experience of life in Washington DC. “In this city, everyone is from somewhere,” he says.

On this Thursday evening, there is a mix of clientele. Outside in the hot summer son, American firefighter Jason Woods is chatting with a group of local nurses – both are involved in a charity for burns victims.

One nurse, Katie Hallowed, proudly talks about her Irish roots in Dublin and Waterford. But in the main they are all Americans, getting together for an afterwork drink and meal. “I like this place a lot,” says Woods, who says he got to know the owners when they worked in another bar in Arlington, just outside Washington. “I live in Virginia and can tell you their barbeque is very good,” he smiles.

Upstairs, the local chapter of the Irish Network – a US-wide association for Irish and Irish-American people in the US – is holding its monthly get-together.

Shannon Sutherland is one of the first arrivals. The 29-year-old from Waterford moved to Washington last year. She had been working for Apple in Cork for three years, but wanted to travel. The US capital seemed an obvious choice, because of its high number of Apple stores in the greater Washington area.

She has since left the company and works in IT while studying for a masters at the University of Maryland. She has no regrets about moving the the US. “For the first six months I was really lonely. I didn’t even have the money to go home for Christmas,” says Shannon who arrived on a H1B visa which allows those with a job to live and work in America.

But now she has a wide social circle, which includes work colleagues and Irish people she has met through Irish networks and other channels. While she really likes the United States, she is dismayed by some of the stereotypes she encounters.

“People often think we’re part of the UK, and I’ve even heard people order an Irish carbomb as a drink. It’s unbelievable.” She also says she has been approached by men on the dating website Tinder who have made jokes about the Famine. “Some people in this country have no idea,” she says.

Like many of her generation gathered in Exiles, she does think about going home eventually, though she points out that all the work opportunities are in Dublin. “That’s a problem. There are so few opportunities from where I come from in the southeast.”

Ciaran Lynch is a PhD student in chemistry at Georgetown University. He completed his undergraduate degree at the University of Scranton in Pennsylvania after winning a scholarship while a student at Belvedere College in Dublin.

He says he is likely to stay in the US in the medium term and is on the lookout for industry jobs. “I’m more geared towards American work life after being here for six years,” he says, adding that in Ireland there is often a lot of politics involved in getting a faculty position.

“There is a lot of opportunity here. It’s a cliche, but if you work hard enough you can get what you want,” he says, adding that he will probably apply for a green card eventually.

Colin O’Callaghan from Dublin moved to Washington recently with his girlfriend Laura Hayes, who works at Nasa just outside the US capital. A physics graduate with a PhD from Trinity College, he works as a data scientist for 3advance, a Washington-based technology company founded by Irishman Paul Murphy.

O’Callaghan was keen to get out of Dublin and live somewhere new, and so far is enjoying America. There are some aspects of Irish life he misses. “It’s the obvious things – family and friends. The pub culture is different. I also miss a good chipper!”

He keeps a close eye on political and social developments at home. He said he is relatively happy with the current government, but thinks more needs to be done on the housing crisis. He also believes that some exchequer money put aside for capital projects should be diverted towards social programmes.

While he has no plans to move home in the near future, he says there are plenty of jobs in his area of work, in the fields of technology and R & D.

He is also taking an interest in the debate about extending the right to vote in presidential elections to the diaspora. “It’s a complex issue,” he says, “particularly because of the huge size of the diaspora.”

One idea he suggests is some form of devolved or overseas constituencies. This would allow ex-pats to “have a say in the Ireland they eventually will move back to”. France is one country which operates a system of overseas constituencies that allows emigrants to vote for representatives who then take their place in the national assembly.

Others are divided about the idea of extending the vote to the diaspora.

Dublin-born Isobel Murray, a lawyer who runs her own business, moved to America 25 years ago and stayed after she met her future husband, Tom. She says she is nervous about extending the right to vote to the diaspora.

“I worry about it because I’ve seen how a well-funded – usually conservative group – can become a very influential voting bloc. What could happen is that you could have a voting block with an old-fashioned impression of Ireland influencing social policy, which does not reflect how Irish people vote themselves.”

She also points out that, while she visits Ireland several times a year, she hasn’t paid tax in Ireland in 25 years. “I pay my taxes here, this is where I should vote . . . It’s a nice idea but ultimately I would be willing to sacrifice a vote for myself because of my concerns about the idea.”

Nonetheless, Murray says she is astonished about the pace of social change that has unfolded in Ireland.

“I couldn’t have imagined that the country would change so much during my working life – all of it very much for the better,” she says. “I graduated just after the first abortion referendum. This was a time when you really felt that women’s rights were inferior to men’s – even that you didn’t matter. To see the evolution – the recent referendums, the large immigrant influx into Ireland – all that was unimaginable 25 years ago in the Ireland I grew up in.”

She adds: “In many ways Ireland is a much more progressive country than the United States is at the moment.”

As for the current US administration, she is philosophical about today’s political climate. “During my time here, I have seen how the political temperature changes with a new administration. Different people come to town, they think they are going to change things fundamentally, but all the time the system continues in the background, the same government department staff continue to work.”

Asked what she thinks of President Donald Trump she replies with a smile: “It’s unprintable.” But she cautions against losing hope. “I was here when the Gulf War began. That was built on wrong information which no one here in DC believed, and people were appalled.”

“It will be alright eventually,” she continues, her optimism a glimmer of that all-American characteristic of positivity. As the customers come and go, and Donagh Gilhooly pulls another pint at the bar, it’s a reminder that American life transcends any one presidency.