The Irish nun who survived floods, famines and shipwrecks 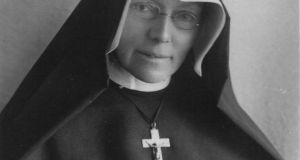 Born in Marylebone in London in 1873, Frances’s early life was typical of the young women of her class; privately educated at home by a governess, presented at court in 1891. George V of Hanover was a frequent visitor to the family home, and godfather to Frances’s sister Frederica. However, it was her later years that would give rise to her greatest endeavours.

Frances held a private but devout faith. Her secondary education took place at the Sacred Heart Convent in Hove, England. The nuns there oversaw everything from the running of the school to the planting and landscaping of the grounds, and perhaps something of their independence and community spirit appealed to Frances.

In 1897 she married the widowed Captain Sir Alfred Moloney, governor of the Windward Islands until 1900, and then Trinidad and Tobago until his retirement in 1904. On Alfred’s retirement, the couple based themselves in England until Alfred’s death in 1913. In 1914, Frances came to Dublin where 2,000 Belgian refugees had arrived with the outbreak of the first world war. Some were consigned to workhouses, and Frances became involved in the campaign to seek adequate housing for them.

France’s training for her new life as a missionary was practical, including midwifery training at Holles Street

In 1918, Frances attended a talk by a Father John Blowick on new missions to China. Together, they planned the foundation of a new congregation, the Missionary Sisters of St Columban. Frances’s stated aims for the congregation show her determination: “The spirit of the congregation will be that of all embracing charity and no effort should be spared to meet various demands which may arise.” At the age of 45, Frances was ready to throw herself into a new life thousands of miles from home.

France’s training for her new life as a missionary was practical and intensive, including midwifery training at Holles Street, general nurse training at the Mater Hospital from 1919 to 1921, a tropical medicine course in London, and another on compounding prescriptions. By 1921, approval for the missionary congregation had come from Rome and a novitiate was established in Co Clare in 1922. Frances made her way to China in 1926.

Fifty-two years old by this time, Frances had taken the name Sister Mary Patrick. She arrived in the Hanyang Province in November 1926. Hanyang was home to the Hanyang Arsenal, an arms manufacturing plant that had supplied weapons to the Qing rebels during the Boxer Rebellion. The area was still sorely contested, with Hanyang Arsenal guns used against Communist Forces in the First Northern Expedition.

In 1931, the Yangtze river burst its banks, leading to a humanitarian crisis that is estimated to have cost in the region of two million lives, displacing a further 25 million people. The resulting famine is said to have led to cases of cannibalism. From August to October of that year, Sister Mary Patrick sheltered 800 local people in her convent until the waters receded. She also toured the region, establishing cholera treatment centres and administering anti-cholera injections and smallpox vaccinations.

In 1936, Sister Mary Patrick was elected third superior of the order and returned to Ireland. The outbreak of war in 1939 didn’t quench her thirst for travel, and, despite the danger, she travelled to the Philippines, China and the US to raise funds.

On her return voyage in 1940, the ocean liner she was travelling aboard was torpedoed, but she survived the wreck, huddled for nine hours on a lifeboat 400 miles west of Scotland. The survivors were rescued by a passing coal boat, and the 67-year-old Mother Mary Patrick was hauled on board in a coal bucket.

Flood, famine, shipwreck; none seemed to slow Mother Mary Patrick’s pace and she continued to take an active role in her order, sending two of the four missionary sisters to UCD to study medicine as soon as the Vatican lifted their ban on nuns qualifying for medicine.

She was vicar general of her order until 1952, and died at the age of 86, leaving behind a reputation for tireless humanitarian work.

This Extraordinary Emigrants article was written by Jessica Traynor, deputy museum director of EPIC The Irish Emigration Museum  in Dublin’s Docklands, an interactive museum that tells the story of how the Irish shaped and influenced the world.