An Irish bodhran player meets the hidden drummers of Iran

Like traditional Irish music, Iranian music can tell us so much about the relationship between people and place 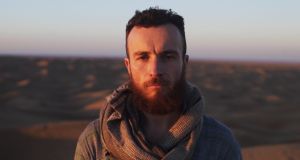 Have bodhran, will travel - Ruairi Glasheen

“What is the purpose of your trip, and why so many cameras?” It was a familiar question during my trip to Iran in January to film my first documentary, Hidden Drummers of Iran.

This time, we are politely perched on a majestic velvet couch alongside the never ending gold plaid walls of the station masters office in Tehran’s central train station. I reached for my bodhran to throw out a few shapes as a precursor to offering an answer.

“Everything in the universe has a rhythm, everything dances,” Maya Angelou wrote. It is almost a decade since I upped sticks and moved to London from my hometown of Cork to pursue a life in music, and this has never been more apparent than during my trip to Iran.

As I played my bodhran, I noticed the station master’s demeanour changing. He was less confrontational and his whole style of communicating with us actually verged towards friendly.

He wanted to hear about Irish music, our culture, the people and my story. He was genuinely interested. I didn’t quite have the balls to see if he fancied trying Irish dancing, so rhythm was thankfully my saving grace in this instance. We briskly packed up our things and were escorted back to the main station concourse, though not before being introduced to his own private collection of designer Swiss watches.

Not only did my bodhran get us out of trouble then; it was instrumental in opening up this fascinating and widely misunderstood country to me.

I travelled around with the purpose of meeting other percussionists, collaborating with them and learning about their lives. It’s not just about the bodhran of course, but the binary language of rhythm and music can offer a communal starting point for people to meet, strike up friendships and work together.

My intention with Hidden Drummers was to make a series of documentary films that uncovered ancient and awesome drumming traditions from around the world.

The films will focus on the current generation of players who are drumming new life into these ancient traditions. With a musical history stretching back almost 3,000 years, Iran was a perfect starting point on my journey.

I wanted to learn about a drum unique to Iran called the tonbak. It’s a small, heavy, goblet shaped drum traditionally made of wood and camel skin. Over the last 100 years the drum has seen a surge in popularity and more recently, with the advent of social media, masses of young players have started a trend of sharing their own videos.

While almost every social media platform bar Instagram and Telegram is banned in Iran, tech-savvy young people are constantly finding ways to access them and connect with each other. I was fascinated to discover these videos online, often showcasing incredible new styles and techniques of playing.

A movement of players has formed who are pushing the tradition into new and unchartered territories. I wanted to meet them.

These new musical mutations made with ingredients from ancient Persia and modern Iran provided the soundtrack as we explored the country’s fascinating political and religious past and present.

Like traditional Irish music, Iranian music can tell us so much about the relationship between people and place. It can be thrilling and frenetic, while maintaining a sense of sophistication and delicacy. It is just as contrasting as the country with its madly busy urban sprawl in places such as Tehran, to the laid-back 1970s throwback culture of other cities, to the stillness and vast beauty of the desert.

The more I travel and experience different cultures, the more connected I feel to my own Irish heritage.

Visiting Iran was a life changing experience. Music was made, lifelong friendships built and hours of video footage was captured to document the entire adventure.

It was fascinating to be in a country where there is no divide between church and state, and it got me thinking of the evolving relationship between our own Government and the Catholic Church. One generation can make such a huge impact on these relationships, and I wonder if Iran, like Ireland, will evolve into a more inclusive and non-binary society.

Being in Iran also reminded me of the feelings I had after moving to London in 2008 to study at the Royal College of Music. Up until that point, my Irish identity had never been of any significant relevance to me and suddenly, it was cast into the spotlight.

I loved the melting pot of different cultures in London, all with their own brilliant similarities and differences to discover. I realised that while the music itself was clearly different, the intention and spirit behind all of these different traditions was shared.

Music is universal and a can be a powerful tool to open up hearts and minds, to bring people together and get people talking and sharing ideas. As I plan and prepare my next adventure, one thing is for sure; I’ll be keeping my bodhran close to hand.

Trailer for Hidden Drummers of Iran