I don’t want to lose my father, but now I want him to go, in peace

Dad has dementia. I’m waiting in hope for that phone call most emigrants dread 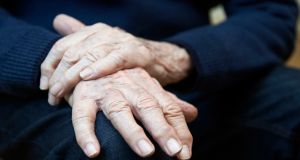 ‘When I visit, I tell him I love him, I even kiss and hug him, something not easily accomplished when he was “all there”.’

I have already received the call every emigrant fears.

Things weren’t looking good. I came back from America and I was there when she died. It was as beautiful and as perfect as it could be, even though we were soaked in grief and disbelief .

It was Christmas Day and she died in her own bed. We wore those paper hats from the crackers we had snapped around the kitchen table.

She sacrificed herself for my dad. The pain of placing him into a nursing home must have seemed worse than the gnawing pain of the thing that would kill her.

Eventually she knew she couldn’t care for him anymore. He didn’t know who she was, and he was all she knew. He remained suspicious to the end. They had to lure him into the car that day to drive to the nursing home.

I thought it would somehow be a relief for her. When I asked later, she told me it was the most awful day of her life. She only visited him there once, in her last sickly year.

So she is gone and he is still here. Well, some of him is here. His mind is gone and it’s not coming back. Even the last sparks of a familiar name or place don’t light a smile. Brain like old lace hanging in the window of a house by the sea.

I remind myself I am lucky he is still here; that when he is gone I will feel alone, an adult orphan. So when I visit, I tell him I love him, I even kiss and hug him, something not easily accomplished when he was “all there”. He just wasn’t that kind of dad. But oh he had a wicked sense of humor! Smart as a whip he was.

I don’t want to lose my father, but now I want him to go, in peace. I’m waiting, even hoping for that other phone call, the one telling me he is dying or dead.

Please don’t tell me there’s a greater “reason” he’s still here; he wouldn’t believe that crap. I have made my own rhyme of the reason why he is here thank you very much, sitting with his blank stare and soup-stained bib. If he could see himself now, I know exactly what he would say.

I’m grateful for the caring staff who tend to him every day. I’m glad for the time I have had to say “I’m sorry” and “I love you”. I am grateful for the moments I could love and hug and touch my now defenseless daddy.

And I am really grateful that he was so demented he would never know my beautiful mother, his devoted wife, was gone forever.

It would have killed him.